You’ve had an idea for an app, and scoured the app stores to see if anyone else has already done it. There’s a half-baked effort by a guy who lives in a basement, but it’s a bit rubbish and got poor ratings. Seize the opportunity! Your family and friends all tell you “Wow that’s a great idea, yeah I’ll download your app.” Asking around local shops and businesses, the response is a bit “meh” but that’s clearly because it’s disruptive and they just don’t get it. Yet.

So how much does it cost to make an app? You have a friend who works in IT but she unhelpfully reckons it’s “however much you’ve got”. A little cursory Googling reveals a plethora of “digital agencies” to choose from... some of them have a form asking you to select your budget. Whoa! The lowest band is how much?!

It turns out you had equity in your house, and your Mum had some savings, and your best friend has offered to partner with you. So after a few phone calls and meetings in hipstery coffee shops, you pick the agency that had the whizziest website and friendliest digital business strategy advisor. The project starts in two weeks!

At the kick-off workshop in the agency’s brightly coloured but slightly musky office (is that a Nerf dart sticking out of the aircon vent?) you meet the project team. They’re friendly and really up for it, but the “Product Manager” (whatever that is) keeps asking difficult questions about your “monetisation strategy” and something about segmenting personas. Worse, they’re sceptical about some of your ideas and want to “reduce the scope”. Although you play along, secretly you’re not giving up on getting all the features you dreamt of - you’re not paying for half a software!

Over the weeks the app takes shape, but it’s not moving at the pace you hoped - how hard can it be to write programs? After a lot of heavy “supplier management” you eventually get all of your features (fist pump) and release to the app stores. Here we go!

Six months later, the frequency with which you check the store has dropped from hourly to weekly. Despite creating a Facebook page and tweeting like mad (230 followers), the app has reviews only from your friends and family, and someone called “l33t_n00b” from Missouri. What happened? Maybe it’s because you didn’t manage to get that new ‘face recognition’ thing done, and it’s too late now because you’ve got no money left. What was it that Product Manager said again...

Contrast this with what happens in a product business. Ideas are triaged and farmed by Product Managers. They will select only those that appear to solve a known problem for a targeted market segment. Products only come into being after a rigorous process of validation and justification, requiring an identified market demand, a plan for how the proposed solution will profitably meet this, evidence that nobody else is already doing it etc. The Product Manager will have to present a thorough business case to some scary executives, who will want to know why the product will survive long enough for them not to have thrown their money away.

So if you’re a budding entrepreneur with a passion for an idea, how do you avoid disaster? Firstly it’s important to recognise that products have a life cycle.

All products begin with an idea, or “Concept”. Many ideas don’t make it past this stage, for all sorts of reasons: it’s already been done, the required technology doesn’t exist, there’s no identified way to make money from it. Assuming it passes these tests, then it’s important to do proper diligence by building a business case. A quick way to do this is to complete a lean canvas: 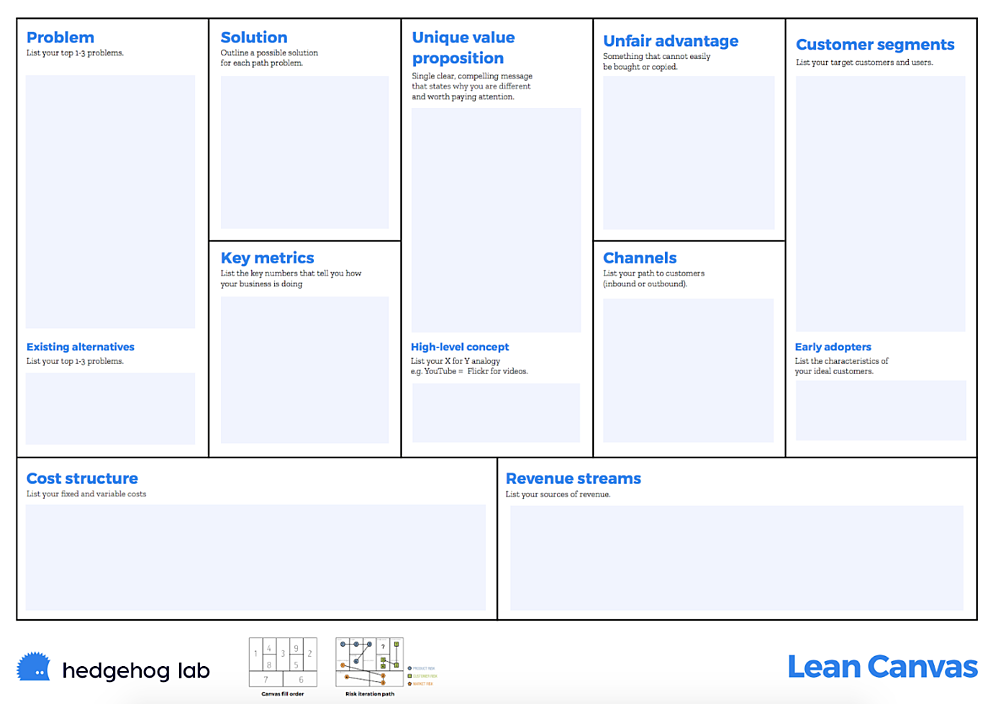 You should take this seriously - don’t risk your life savings (or your Mum’s) until you can fill out all of the boxes and are happy with what you’re saying. For example if you can’t say what your “unfair advantage” is, then your product will probably be just a me-too and join the ranks of nice but unprofitable business ideas.

Amazingly, there is a trend for digital products to launch without a monetisation plan, and only a vague notion that this will be added later. This is a serious misapprehension of the very deliberate strategy of some successful products that build active users and loyalty, then leverage these by moving features to a premium version or creating in-app purchase options. Remember: the success of a product is measured in £$¥€, unless it is an altruistic gift to mankind.

Assuming you can make your case and have obtained funding, then you can build your product; unless you’re a master coder that doesn’t need sleep you will be recruiting a team. You can hire or go to an agency, but either way this is where you start to spend. Quickly.

The finances of a new software product development are often misunderstood. It’s not only likely to be costlier than you think, but also the investment doesn’t end when you think it’s going to. It’s common to make the mistake of trying to ‘finish’ your product and then launch it. Actually, launch is where the fun begins - you’re looking for revenue to start flowing in, but don’t kid yourself that your outgoings are done. In truth, it will be some time before you break even. 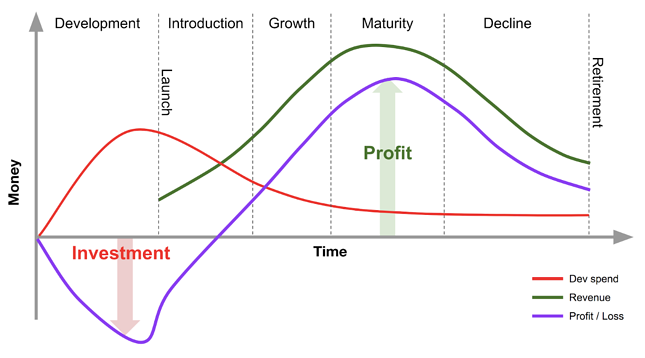 It is wise not to launch with too many features, because this will (a) cost more, (b) confuse your new users and (c) make it harder to analyse which features are improving success. Instead, concentrate on those that differentiate your offer, that solve a problem in a new way or better than before. Better still, create a ‘Minimum Viable Product’ (or ‘Riskiest Assumption Test’) which is given only to a cohort of engaged early adopters, who will hopefully validate your killer business idea. Conversely they may kill it stone dead, but at least this will be before you burn up your Mum’s nest-egg.

Assuming you market it well, then people will start to use your product. They will find problems, identify gaps, ignore features that you thought were killer and generally correct your preconceptions. You will need to respond to this feedback with adjustments, new features and versions, and maybe even the odd pivot. This is what is called “In Life” product management, and it is at least as important as the original idea, or the initial build and launch. Persistence towards a vision is an essential characteristic of successful entrepreneurs, but in the digital world it’s also crucial to listen to your market and maintain agility.

Unless you really can foretell the future.