Last Monday morning I woke up to some Facebook messages. One message told me that the weather was a little dour in Newcastle, and told me what I should wear to protect myself from the conditions. Surprisingly, it wasn’t from a parent.

Another message told me that Gareth Bale isn’t returning to ply his trade in the Premier League despite spending only 15 minutes of the Champions League final on the pitch, whilst there was also a mention of the weekend’s terror attacks. This message wasn’t technically from a parent either, though I suppose it was from a Guardian.   After reading the above messages, I scrolled back to one I received over the weekend, containing a betting tip. Thankfully I didn’t miss out - the suggestion of backing Ronaldo and Higuain both to score in that final mentioned above didn’t become a reality thanks to the latter player going missing on the night.   But none of these messages came from my friends. The first came from Epytom Stylist, a fashion bot I found on ProductHunt which I oddly use more for weather updates. The second came from The Guardian newspaper bot, and the third from PaddyPower - a bookmaker who have launched their chatbot within the last fortnight. 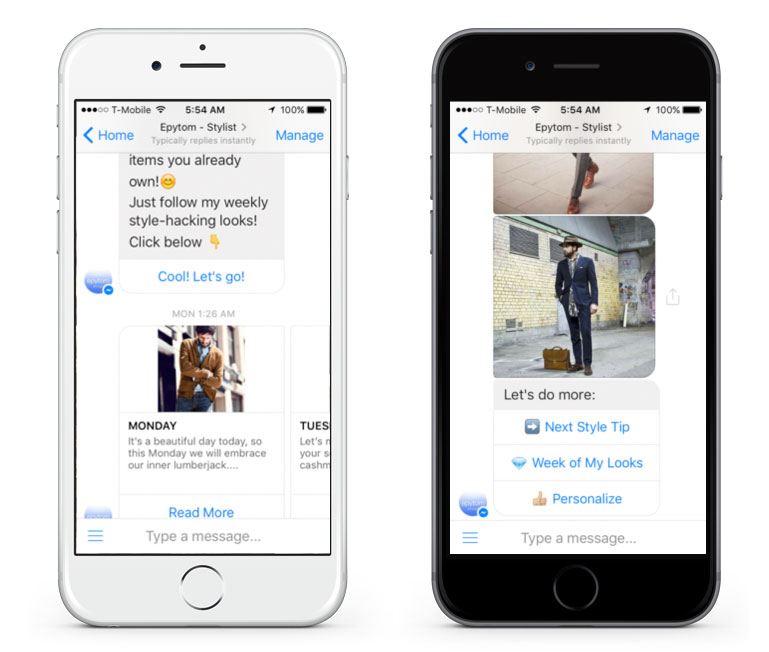 Increasingly big brands and startups alike are turning to chatbots. At a time where Facebook are notorious for limiting the ability to reach the audience you’ve created, it’s a rare opportunity to engage with that very audience in a more personal space - and one which is much harder for the user to just ‘ignore’ or disregard.   It’s quite handy for us users, too. I quite enjoy being able to catch up with the latest news (which I can personalise to ensure that it’s stuff that I’m interested in) and weather before I even get out of bed. I also like being alerted to enhanced odds on bets that I’d likely otherwise miss out on and receiving comedic content from Paddy Power’s marketing department - which is in my view the best in Britain.   All three of the bots serve different purposes. Consumption of media has transformed dramatically with the rise of technology. Figures show that whilst online consumption of news has rocketed - sales of the tangible product that ruled the landscape for so long have declined so dramatically that some prominent newspapers have completely ceased to produce one.   According to the BBC, The Guardian are the best-performing online ‘broadsheet’ in Britain in relation to unique daily readers. But that doesn’t necessarily define success. Despite their commitment to reinvest any profit into journalism, they reported losses of £69m in the financial year of 2015 as revenue from digital advertising continues to be sucked up by giants such as Google and Facebook.   So why turn to a chatbot? Well, as mentioned, some social platforms are limiting the ability of media groups to reach people they want. At a time where the GMG (Guardian Media Group) are increasingly reliant on their three-tier membership system, why wouldn’t they jump at the chance to demonstrate they can provide personalised content on demand and drive more traffic to their website. 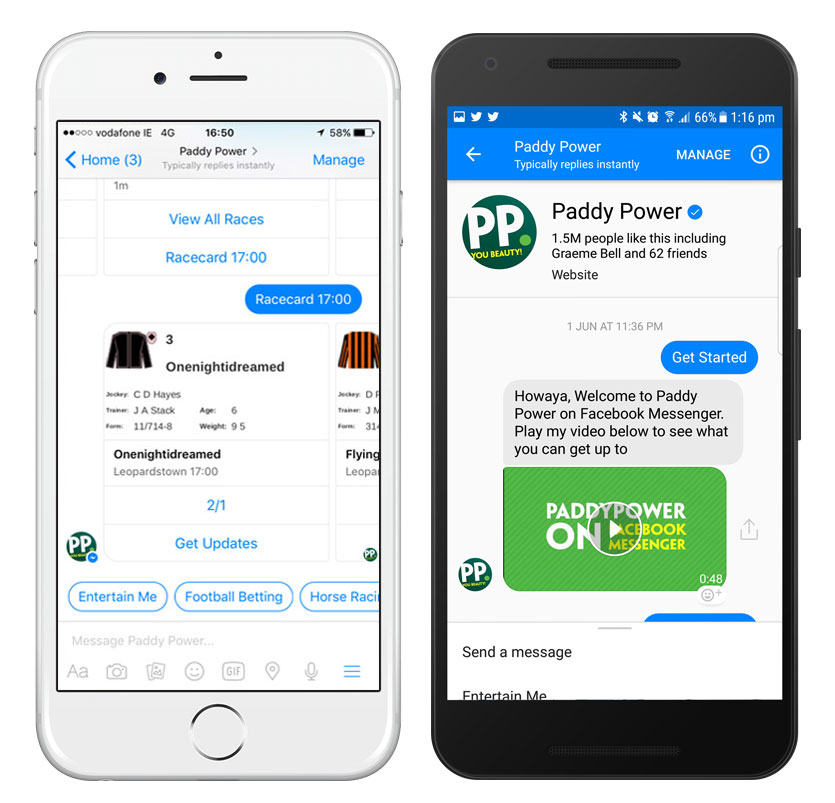 Luck of the Irish, or an easy decision?

Paddy Power offer another fascinating case. Back in January 2014, they launched ‘PP Messenger’ - a messaging app in which you could place bets. The Irish company initially launched their app as they aimed to provide a more personalised service. Within the year, they pulled the plug and put all of their eggs in a Facebook Messenger-branded basket.   Upon launch of their newest product, their Product Director Michael Healy told of how: “We know our customers love mobile messaging apps, so having a chatbot on Facebook Messenger is the obvious first step into the chatbot marketplace.” It was a statement which very much suggested that despite the crossover in functionality, they see the two as separate products - the former was an app, the latter is their chatbot.   Innovators in marketing, the company, don’t slack in other areas, either. In fact, the launch of the Messenger chatbot marked a first in their industry. But what drove them to ditch their already-unique messaging app - other than the obvious benefit of being able to send out media such as images and video.   Clues can be found both in what they said in 2014 and what they said more recently. The company wants to provide a personalised service. Whether it’s WhatsApp, Messenger, WeChat or otherwise, does it get more personal than an inbox? Equally, they’ve demonstrated that providing a service based around messaging is viable - they’d be silly not to explore that further.   It was recently suggested that 77% of users removed an app from their phone within three days of installing. At the launch of PP Messenger, Paddy Power already had an ‘industry-standard’ app on the market.   Two possible conclusions you can draw from the above are that Paddy played an engagement-based blinder by reawakening thousands of inactive users with a new app. Another, perhaps related, is that consumers were never likely to keep and use two apps which are designed to achieve the same end goal - but would maintain the one that allowed for their preferred method of betting. 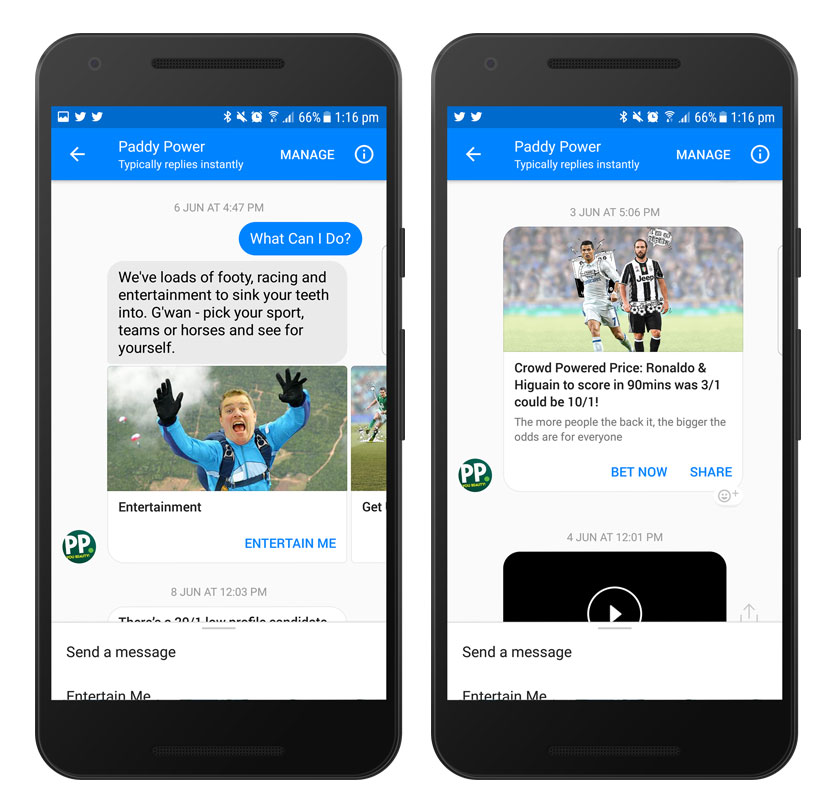 Ultimately then, Paddy Power identified (and arguably created) the desire for message-based betting. Moving to a chatbot from an app removes the costs associated with continued high-quality app development and, in this case, places the burden on Facebook.   Immediate improvements such the accommodation of different media types mean they’re already benefitting from the move, and allow the organisation to spread their popular social content more efficiently.   Something both The Guardian and Paddy Power are keen on is personalisation. If I selected Manchester United as my favourite football team in their old app, for example, Paddy Power would update me with odds on the club winning the title before the start of the season.   With the new season starting in August, how much more powerful would the same message be if it also came with a video attached of a pundit explaining why Manchester United will win the league. How many more people will be persuaded to part with their cash - even if we all are just inevitably adding more gold to Paddy’s pot?

The ability to personalise content and reach a personal space is a huge opportunity for any organisation. The development of a Messenger-based chatbot that wouldn’t simply bore a user into submission might not come cheap. But the backing that major brands with a track record in successful innovation are giving the new technology should serve as an awakening - this is an investment that you might not be able to afford to miss as a business.