The impact that technology has had on retail hardly needs re-emphasising. Yet recent research from OC&C Strategy Consultants, PayPal and Google certainly offers a neat crystallisation of the change the sector has undergone, highlighting how British shoppers now spend £1 in every £5 online. Within three years, it suggests, online shopping in the UK, US, Chinese and German markets will double in size to be worth £645bn.

Among the factors behind the change is the increasing power of smartphones, offering consumers greater efficiency and convenience than ever before. Rapid improvements in the technology have also sparked changes on the high street, where the sight of customers swiping iPhones, rather than credit cards, across payment terminals is becoming increasingly common. Indeed, while industry insiders, and mobile app developers remained skeptical for some time about the rise of the mobile wallet, the figures speak for themselves. In 2012, there were 5m people worldwide using so-called near field communication (NFC) mobile payments. Within only three years, that figure had risen by more than ten times - and it’s set to reach 166m by 2018. Clearly, mobile payments are now a vital part of any brand's retail mobile strategy.

For the consumer, then, it’s not so much a matter of whether to use technology for shopping, but of what technology to use and how best to use it. Here, we look at some of the most prominent and exciting tools on the market today, providing an insight into how they work and an analysis of their pros and cons.

Of all the innovations powered by NFC - a chip-based method of enabling secure, highly localised data transfer between two devices - Apple Pay is probably the best known. The service, which is compatible with most major debit and credit cards, means shoppers can store said cards digitally within the Wallet application before enjoying contactless payment using an iPhone or Apple Watch. In each case, the process is simple, involving little more than holding the device near a contactless card reader and waiting for it to vibrate or beep to confirm the payment has cleared.

It’s also secure, since no card numbers are stored on the device or on Apple servers. Instead, when a card is added, a unique Device Account Number is created and encrypted. This is then matched to a dynamic security code specific to each payment. Likewise, there is no need to enter a PIN, since identity is verified through the Touch ID sensor. And for those concerned about privacy, Apple has confirmed it makes its money through levying fees on the banks involved rather than through collecting customer data.

Already, Apple Pay can be used anywhere that supports contactless payment, and, in London, is valid for travel via Tube, bus and rail, following a deal with Transport for London (TfL). The technology also offers an easy and secure way to make payments within apps. It’s sole striking downside, then, is that it’s only available in iPhone 6 and above - meaning it doesn’t come cheap. Oh, and not everyone’s up to speed with it - you could get some funny looks.

Once upon a time, Google’s NFC payment offering was included in the Wallet app. Now, it’s known as Android Pay - and to all intents and purposes, it's a much sharper and more convenient tool than its predecessor.

Like Apple Pay, the technology provides a seamless method for storing cards. In-store payments, meanwhile, couldn’t be easier; those under £30 can even be conducted without unlocking the phone. And, because of how the service is built - allowing for an API that can be coded into supported apps - it can access loyalty card details, including them in the transaction, thus further reducing the need for a wallet.

Currently, Android Pay - which works with all Android devices running KitKat 4.4 or above - has by far the best device compatibility of its kind. Again, it can be used anywhere with contactless payment terminals, and also supports in-app and even browser payments. Other plus points include the same London travel perks as Apple Pay; an Android Pay Day initiative offering discounts once a month; and the means for using a PIN code, password or pattern for authentication should one’s phone lack a fingerprint reader.

Security-wise, Android Pay makes use of tokenisation, the retailer receiving a 16-digit virtual number instead of an actual account number. This is generated randomly within Google’s servers, not on the device itself.

At time of writing, the service cannot be run through Android Wear smartwatches. That, however, looks set to change. Google is also said to be working on a feature known as Hands Free, which would enable customers to pay by saying: “I’d like to pay with Google”. 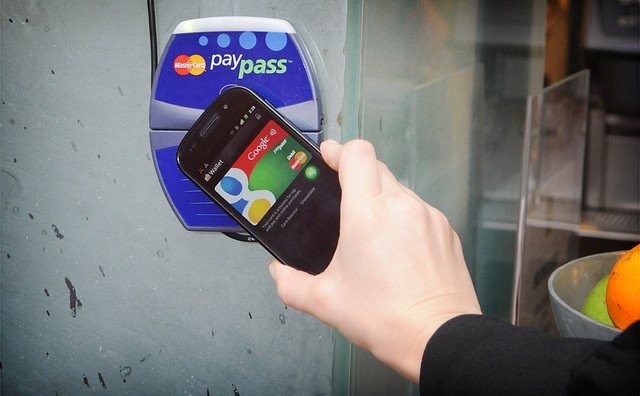 These days, the stripped down Google Wallet acts as a peer-to-peer payments service, enabling the sending and receipt of money from mobile devices and desktop computers at no cost to either sender or receiver. Available for Android devices running Android 4.0 and above, and for iOS devices with iOS 7 and above, the tool allows users to link their accounts to funds by either entering bank information or storing credit or debit card data. Money can then be added to the balance or pulled through directly by Google Wallet from selected sources. To send funds, the user simply enters the recipient’s email address or phone number. If the recipient has Google Wallet, the funds will post directly to that account. If not, he or she will have to link the email address or phone number to a bank account. The money will then be available immediately.

In saying this, earlier versions of the technology faced criticism when it was revealed some stored card information was accessible outside the application. It was suggested at that point that hackers could find a way to intercept the data by eavesdropping on Google Analytics. Concerns have also been expressed about the sheer quantity of data being stored by Google indefinitely.

Released just months after Samsung purchased LoopPay for its payment technology, Samsung Pay offers one clear advantage over its competitors. Due to its use of MST - or Magnetic Secure Transmission - the tool lets smartphones emulate card swipes on pretty much any payment terminal, greatly expanding the number of places in which it can be used. (It will fall back to NFC for terminals that have it). Other benefits include gift card support, Gear smartwatch compatibility, ease of card selection and (if you have an Galaxy Note 7) iris scanning for authentication.

On the downside, the service is currently only available in the US and South Korea, only works on high-end Samsung devices with certain carriers and supports less cards and banks than Android Pay. One security expert has also claimed he can intercept Samsung Pay transactions using a ‘token skimming’ device hidden in his shirt sleeve. The company, however, has insisted the technology was built with “highly advanced security features”.

A cashless payments system from Barclays, bPay - like most of its rivals - can be used at any retailer that accepts contactless payment, as well as on London transport. To make use of the technology, however, one must purchase a sticker to attach to the back of one’s phone, a key fob, a wristband or - if one has £150 spare - a specially designed jacket produced in partnership with Lyle & Scott. Each of these contains an NFC chip, which works in conjunction with a pain-free Android or iOS app through which users can top up their digital wallets using any Visa or MasterCard credit or debit card. The  app also keeps track of payments and balance, and includes an auto top-up feature that allows it to draw down more funds from cards once a certain balance threshold is passed. If the bPay device is swiped or mislaid, it can be cancelled right away to prevent further payments being made. 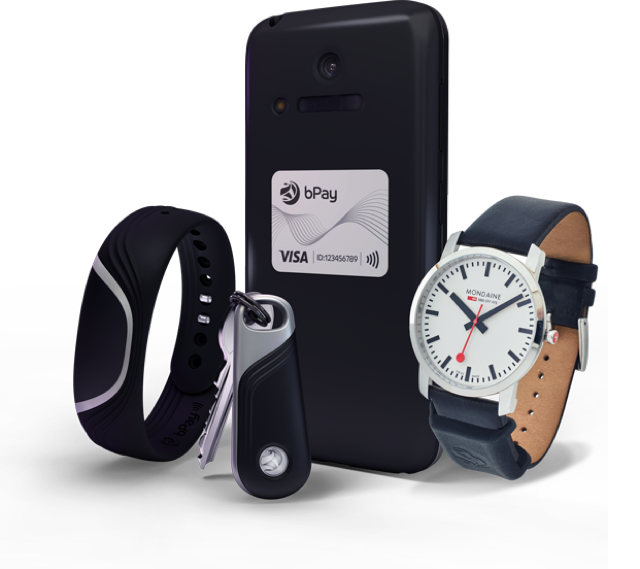 Technology and wearable products company, Jawbone, built its latest fitness tracker, UP4, on a multi-sensor platform with advanced activity, sleep and heart health tracking. The  standout feature of the wristband, though, is that it facilitates in-store payments via American Express. As the company itself puts it: ‘We asked ourselves the question: if you are wearing an UP band 24/7, what is the integration that would make your life simpler, more convenient and just more efficient. The answer for us was payments. Paying with our credit cards is something that we do many times a day, and we thought we could make the experience even easier.’

American Express Card Members with an UP4 can connect their cards to the tracker through a dedicated iOS or Android app, logging in with their usual Amex username and password. All they then have to do is select the card they want to use and they’re ready to go.

Jawbone describes the payment process as ‘seamless’, requiring nothing more than a tap of the wrist on the terminal, at which point a sound will signal the transaction was successful. The technology can be used anywhere American Express contactless payments are accepted, and the company says its system is as secure as using the card itself. Transaction and account details are kept private throughout. 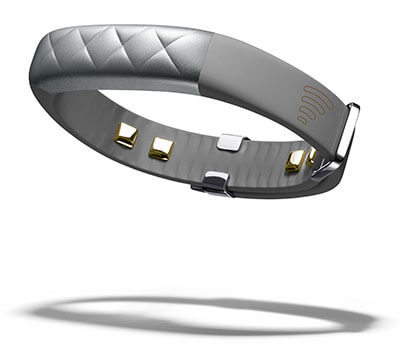 Canadian startup Nymi has partnered with Toronto-Dominion Bank Group and MasterCard to create the world’s first wearable credit card payment authenticated by heartbeat. The technology, in fact, makes use of a person’s unique heartwave shape to prove their identity - biometric innovation that’s not just cool, but practical, since, after creating an authentication profile, there’s no need to authenticate each time the device is used; it's happening in the background. As the company’s founder and CEO, Karl Martin, has said: ‘Nymi’s goal is to fundamentally change the way authentication is treated and to move industries towards a more secure and convenient identity model. By working with partners such as TD and MasterCard, we are effectively demonstrating that continuous authentication can be a more secure and convenient way to make retail payments.’

The tech is currently being trialled in Canada, with US and European trials in the pipeline. Nymi is also hoping to build it into popular wearables from other manufacturers. The company believes its offering could be more attractive to banks and financial institutions than those from its competitors, since it does not want to become a middleman. 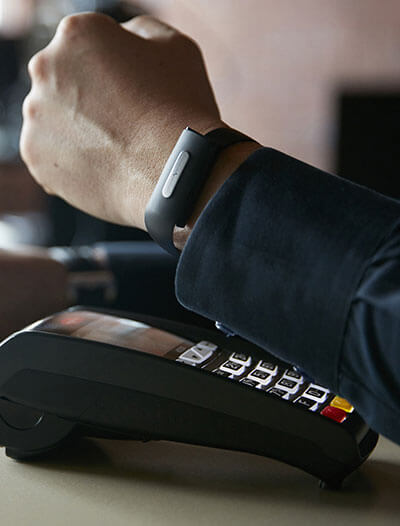 Perhaps the best-known name in the world of digital payments, PayPal’s core business is its online money transfer system, which eliminates the need to exchange bank account or credit card details. 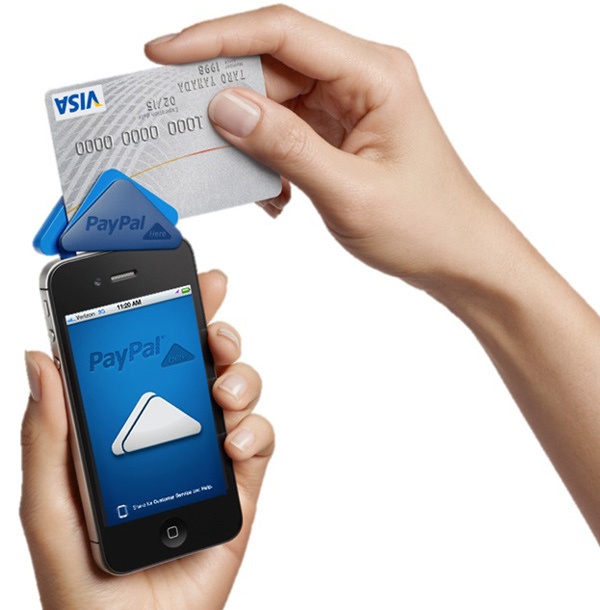 The company - which operates in over 200 markets and has around 188m active, registered accounts - however, offers a wide range of connected services, from PayPal Credit to the small business mobile payment system, PayPal Here. In 2013, it even released an app for iOS and Android that allows users to search for local shops and restaurants that accept PayPal payments, order ahead at participating venues and access their accounts. In short, PayPal isn’t going anywhere and, for many, it’s the central tool in their online shopping. 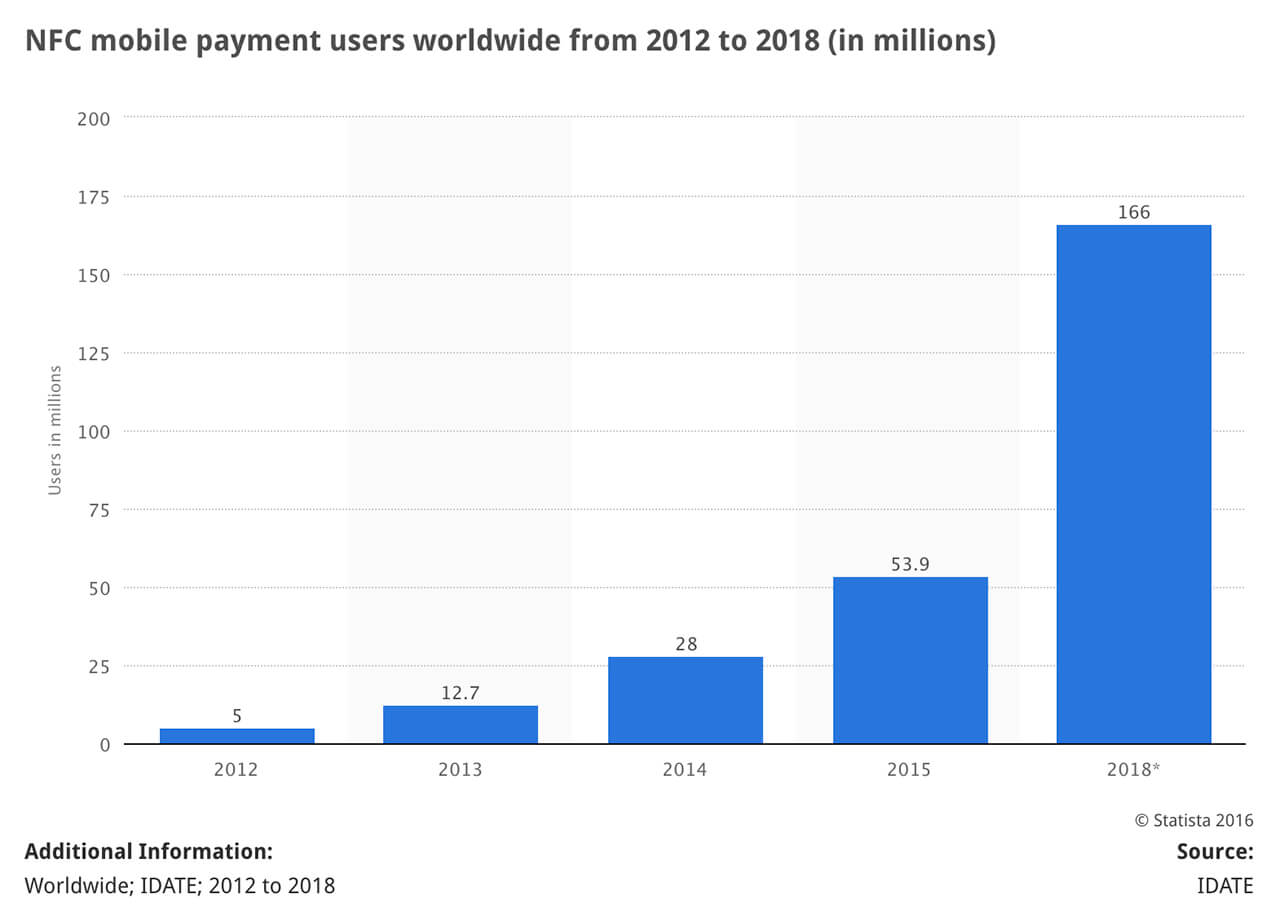 Clearly, then, the modern consumer is spoilt for choice when it comes to payment, with mobile tech driving a shift towards convenience and security. At hedgehog lab, however, we believe we have only seen  the tip of the iceberg with regards to innovation and that many great changes are still to come. Whatever the Next Big Thing is, though, it will have to bring the public on board with it - as well as the retail world. And that means it will need to have a great app at its heart. 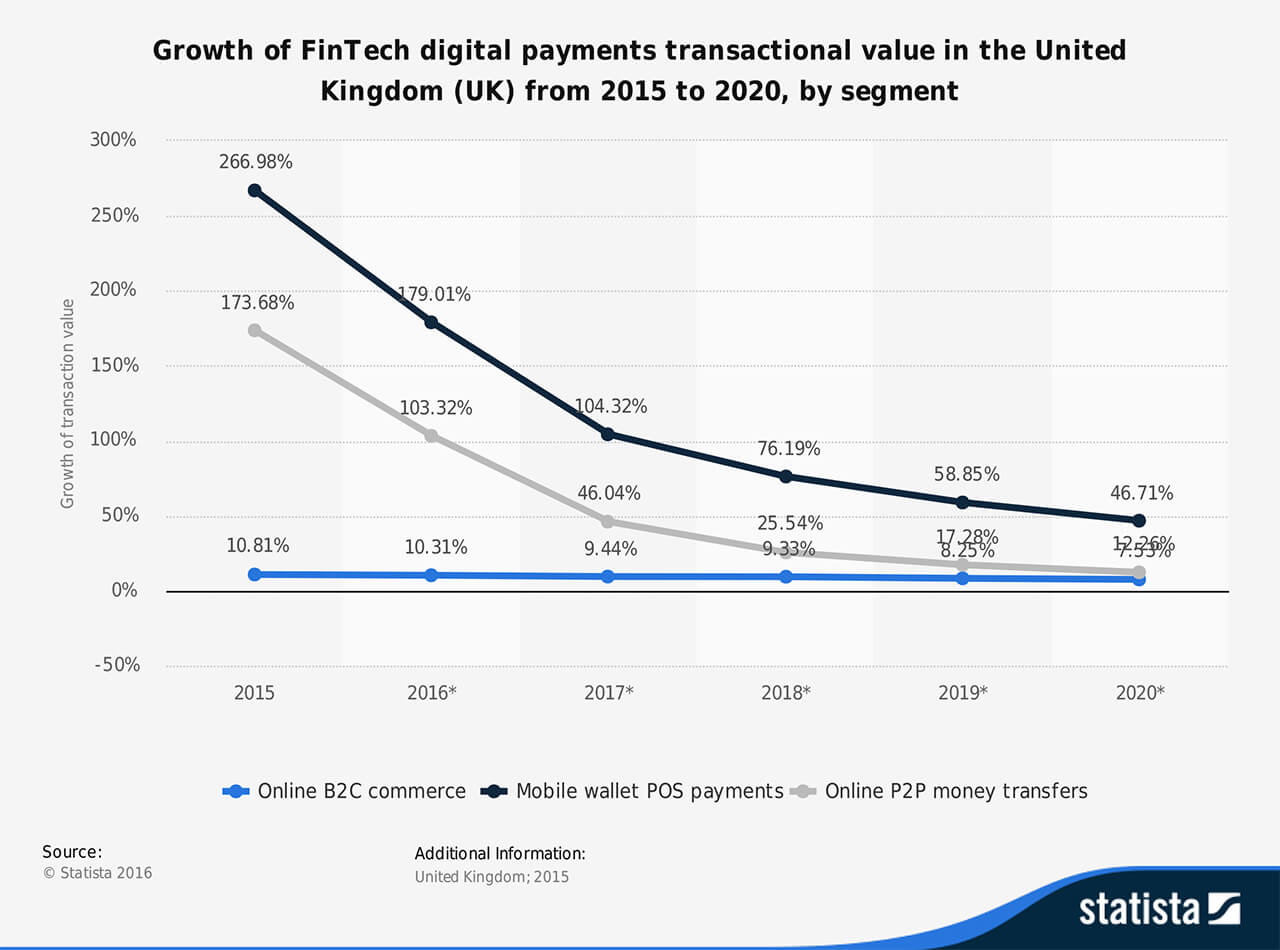