During their annual Worldwide Developers Conference (WWDC), Apple announced the latest version of their mobile operating system, iOS 10. At hedgehog lab, we find every update to iOS exciting, because it means we get to work on some new features and discover new ways to interact with apps on this ecosystem.

However, this year Christmas came early for our mobile app developers at WWDC 2016, as Apple opened up so many apps and features to developers. Tech geeks all over the world are jumping with joy thinking of the amazing opportunities we have to utilise these new features.

In terms of versioning, iOS 10 was the natural transition from iOS 9. But Apple took the evolution one step further, using its name to their advantage as they announced 10 great changes to the iOS ecosystem. Let’s take a look at them:

Apple has made a lot of changes to the iOS user experience. The arrival of Raise for iPhone will enable users to simply lift their phone and see the screen, without having to touch a single button. This feature is already available with the Apple Watch, where the screen activates in response to raising your wrist.

Meanwhile, Apple has changed the way Notifications look on your lock screen, meaning they no longer blackout the background. Instead, they appear more like small cards or bubbles on the screen. Along with these changes, the announcement of rich notifications means users can harness 3D touch capabilities to launch an app based on the notification and interact with the notification requirements without launching the app.

In the latest OS update, Apple has removed the Camera button on the lock screen, instead enabling users to slide over from the right corner of the screen to activate the camera automatically. Users can also add interactive widgets to their home screen, which they can use without launching the app. 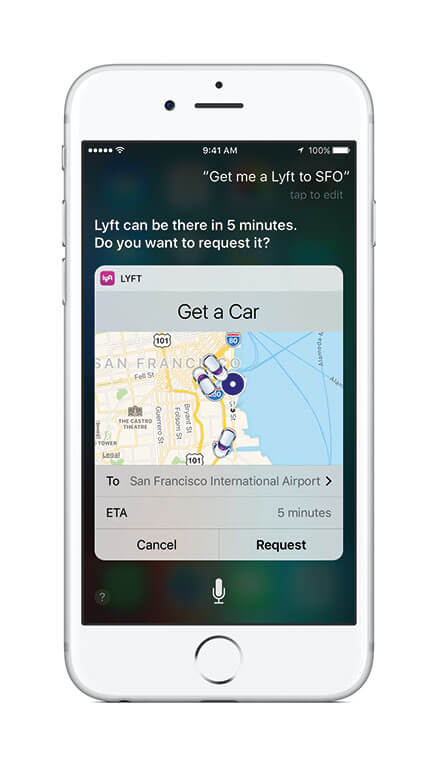 The biggest announcement for Siri at WWDC 2016 was one that mobile app developers have long been waiting for. This is the ability to integrate their apps with Siri, allowing users to interact with their apps through this platform.

Every year, developers have waited in hope that Apple would open it up to them, and this time they have. Whilst Apple will be making Siri available for developers to integrate into their apps, it will initially be restricted to a few categories. 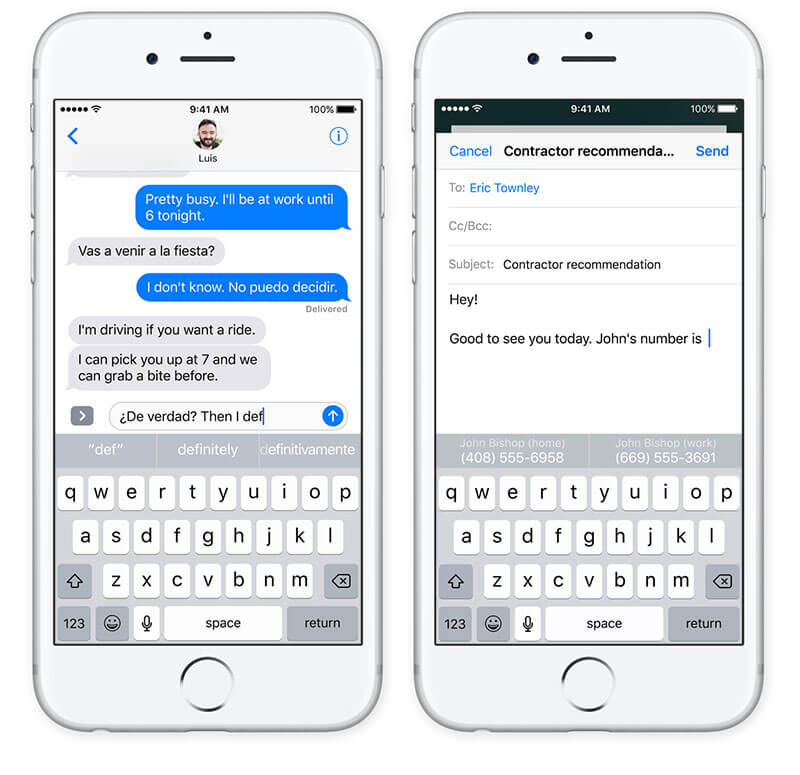 Apple has enhanced the Quicktype feature of iOS 10 with Siri level of intelligence. The Quicktype bar that sits above your keyboard while typing can now understand the context of content being written, and change suggestions based on this information.

Along with providing smart textual replies to suggestions, it can also share location, contact information, scheduling, calendar availability and multilingual typing. This will significantly improve the extent and quality of the keyboard’s smart interaction. 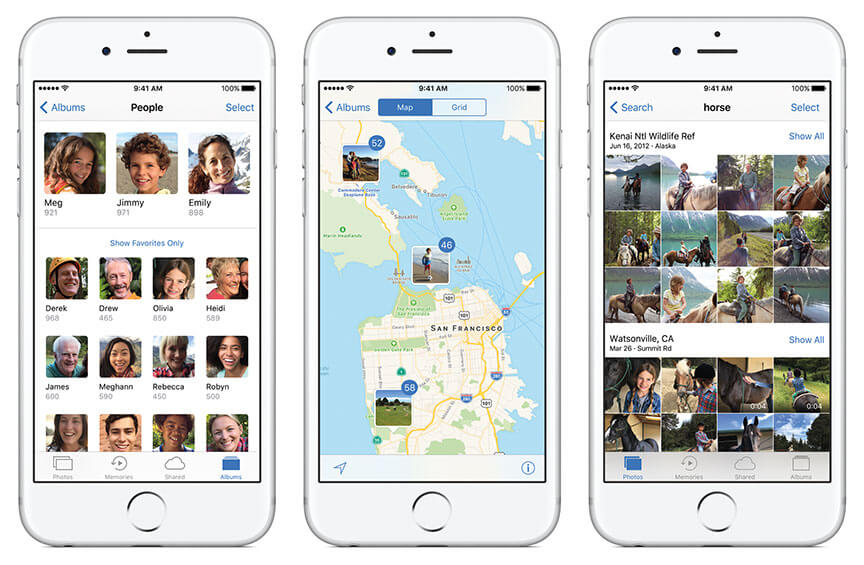 Apple announced updates to the Photos app, giving it facial recognition capabilities. This process involves using advanced deep learning software on the iPhone itself, without ever pushing data to a remote location. As well as recognising faces, the software will identify locations, landscapes and even animals.

Another update was a section called Memories, which uses software algorithms to create albums, topics or instant videos based on tags, time, location and people identified in pictures. 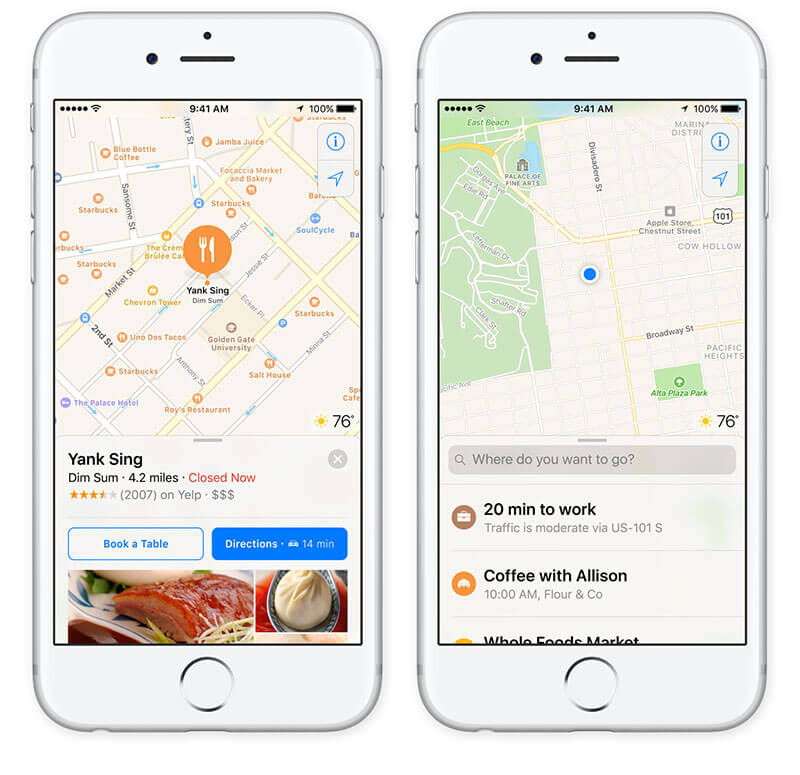 Apple Maps has long strived to live up to Google Maps, but has often been criticised for its lack of usability in most areas outside of the US. In line with its continual efforts to improve Maps, Apple has made it more proactive. Now, you can sync Maps to your calendar and receive route suggestions, based on the event and location.

Meanwhile, Apple has finally introduced a dynamic view and traffic en route, with the ability to search for places along your route, such as supermarkets. The cherry on top of these announcements? Maps will be opened up to developers, who can create extensions that enable users to perform most actions for an app within Maps itself. 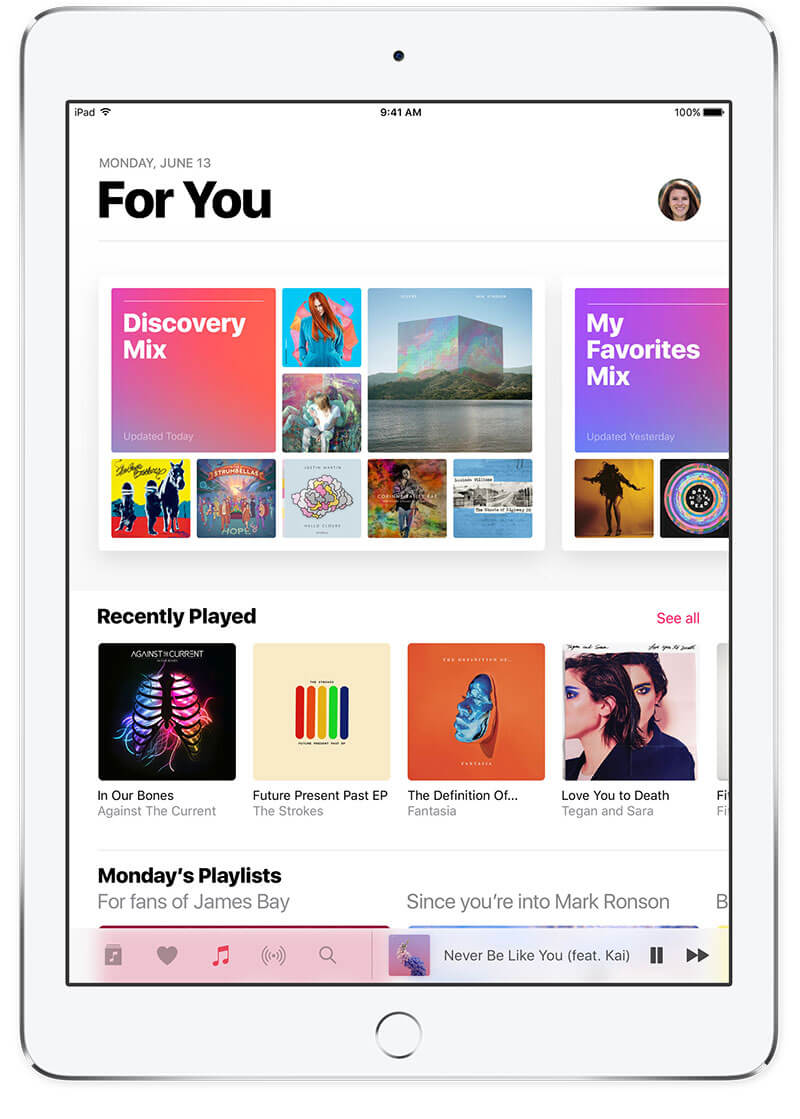 Apple has completely redesigned the Apple Music app in iOS 10, transforming the look and feel. Changes include the reorganisation of tabs on the bottom, to prioritise access to the user's library, and the ability to view lyrics within the song information screen itself, making it easier for users to sing along while listening to a song. 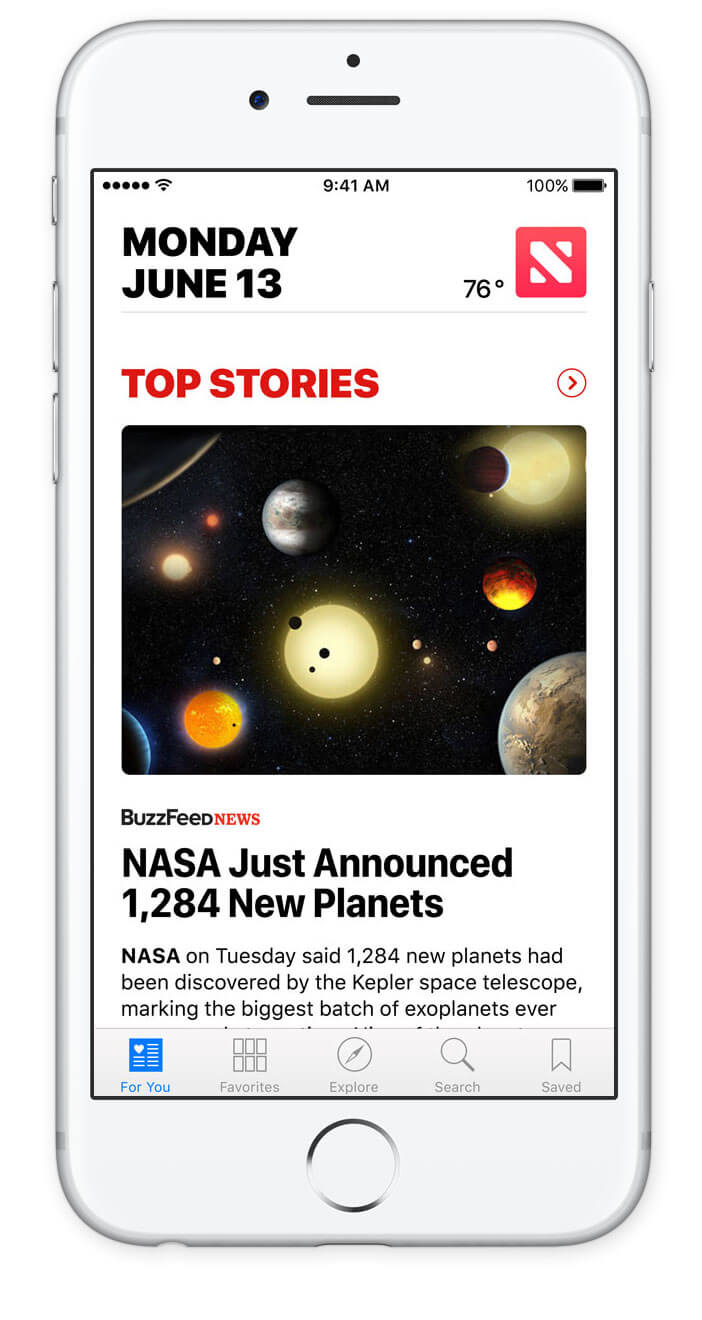 Apple's News app allows users to read news and articles from various publishers, so it’s fantastic to see that it now features articles from over 2000 publications on a daily basis.

Apple has also redesigned the News app for iOS 10, including a range of new features. Users can now follow smart topics based on their reading habits, as well as browsing curated articles and top stories selected by Apple’s editors.

At WWDC, Apple also announced that the News app will support subscriptions, enabling publishers to generate revenue by providing users with the latest and greatest content. 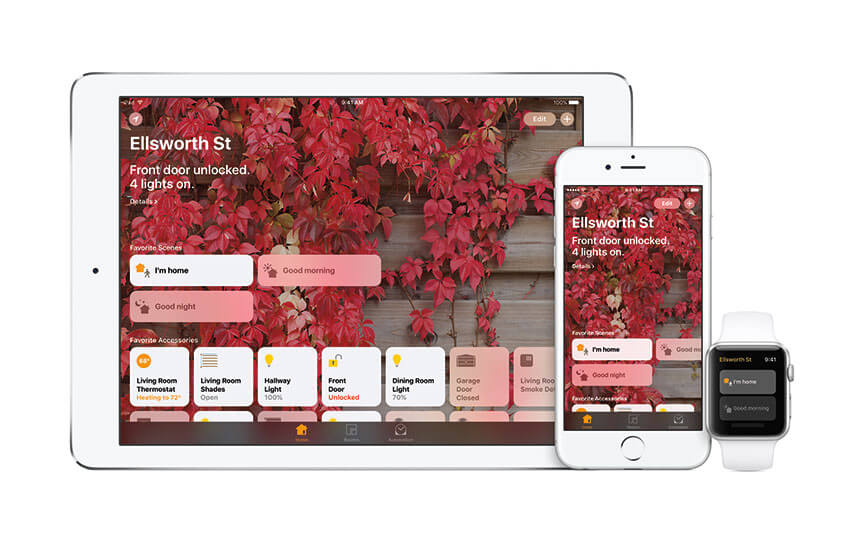 HomeKit is Apple's own framework, which allows mobile app developers to build apps that can be controlled by an iOS device, without having to create another bridge for interactions. This year, Apple announced that they have increased the range of devices that are compatible with HomeKit.

Apple also announced that some builders across the world are supporting HomeKit and constructing homes that can directly connect to your phone, enabling you to control everything in your house with smart automation.

Apple has never opened the Phone functionality and feature up to developers before, but with iOS 10 they announced a few ways for mobile app developers to access this feature. One of the examples shown at WWDC was an API, which lets you connect to a third party database to identify the caller if they are not in your contacts.

Apple also launched a VOIP API, which allows developers and apps to have the same functionality as a native cellular phone call on the iPhone. This will enable users to take advantage of a better user experience for VoIP calls than ever before, by calling their contacts directly using a VoIP app.

Another amazing feature they announced was Spark, an app developed in collaboration with Cisco. This enables enterprise users to receive incoming calls on their work number through their personal iPhone, using the VOIP API to re-route calls. As a result, you can effectively answer work calls from anywhere in the world. 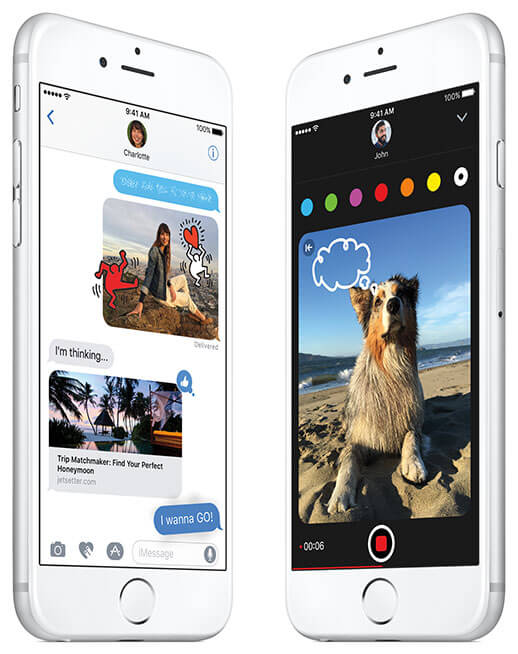 Apple also announced a few changes to the Messages app. They have enabled users to share rich links, which means a website, image or even video can be seen directly in the message instead of displaying as a text, without leaving the app.

Other small changes include bigger emoji's, emoji predictions, and the ability to tap text to change into an emoji. Apple has also given new ways to share messages using emotion bubbles, including an invisible ink feature to send hidden messages. Along with these changes, Apple has enabled hand writing and sketching in the Messages app.

Apple has also opened up Messages to the mobile app developer community with iMessage Apps, which means users will have an app drawer in iMessages. As a result, developers can access not just the iMessages functionality, but the whole iOS SDK's, enabling them to create new and innovative apps.

The general trend of iOS 10 has been to focus on providing developers access to most features that they have been wanting to get their hands on for years. Whilst they are quite restrictive at present in terms of what can be achieved, savvy mobile app developers and entrepreneurs have always found smart ways to utilise what they have been given and create truly innovative mobile apps.

We, along with the whole mobile app development industry, are excited to see what amazing apps we can develop for our clients using all the API's, SDK's and features that Apple opened up to the development community for the first time.

Want to see how we can harness these features for your next project? Get in touch!