Apple hit the Big Apple for their latest event, where they'd reveal a new MacBook Air, Mac mini and iPad Pro. Here, Dale Jones explains why the tech giant's latest announcements could be gamechanging for enterprises.

Unsurprisingly, early headlines from Apple's October 2018 event centre around the confirmation that new MacBook Air, Mac Mini and iPad Pro devices will hit the shelves from November 7th.But while there's undoubtedly plenty of reason to be impressed by the company's latest (and much speculated) devices, it is a theme and not a product from the event that caught our eye, one that was evident from the off. Apple took things to the New York City for their latest event, and more specifically the esteemed Brooklyn Academy of Music. A hub of creativity since the 19th century, the historic venue perfectly reciprocates the mission of Apple's latest products: to provide people with the tools to unleash their creativity. The manner in which Apple's latest event unravelled is likely to reflect the success of the products themselves. Kicking off by announcing a new MacBook Air, following up with the reveal of a new Mac mini, sharing the latest developments with Today at Apple and rounding things off by showcasing the new iPad Pro, the audience was left dazzled by a series of short, sharp crowdpleasers - but there's an argument it got better as it went on.

The MacBook Air is strong.

The likelihood is that as with any new technology, there'll be a period where early-adopters find themselves just as awe-struck during the primitive use of their new, 100% recycled technology. But it is the long-term potential of the three new devices that has left us excited. Take the MacBook Air, for example. Apple describes the device as their most creative product. Customers adore it, with millions of new users added per quarter and an active install base of 100 million. MacOS Mojave recently refined and refreshed the look and feel while preserving ease of use. Nevertheless, Apple has pressed ahead with further enhancements making the new MacBook Air sound like a Daft Punk premonition. Faster, thinner, lighter, greener; the device embraces 'less is more' in all the right places. Of course, the most-requested features are present too. Retina display, Touch ID, better speakers, you name it, they're in. But it's when we dig into the specs and take a look at what lies under the 100% recycled aluminium hood that we see the longer-term value. Supporting up to 16GB of memory and up to 1.5TB of SSD storage, there is double the capacity of its predecessor and the device comes in at over 60% faster. Thunderbolt 3 (USB-C) allows for charging, external displays and additional storage, while a new T2 security chip leaves devices better protected than ever before. Such enhancements that ultimately make the newest generation of Air a viable, trustworthy and robust option for enterprises that employ complex programmes, and all at great value for money.

The Mac mini is no small feat. 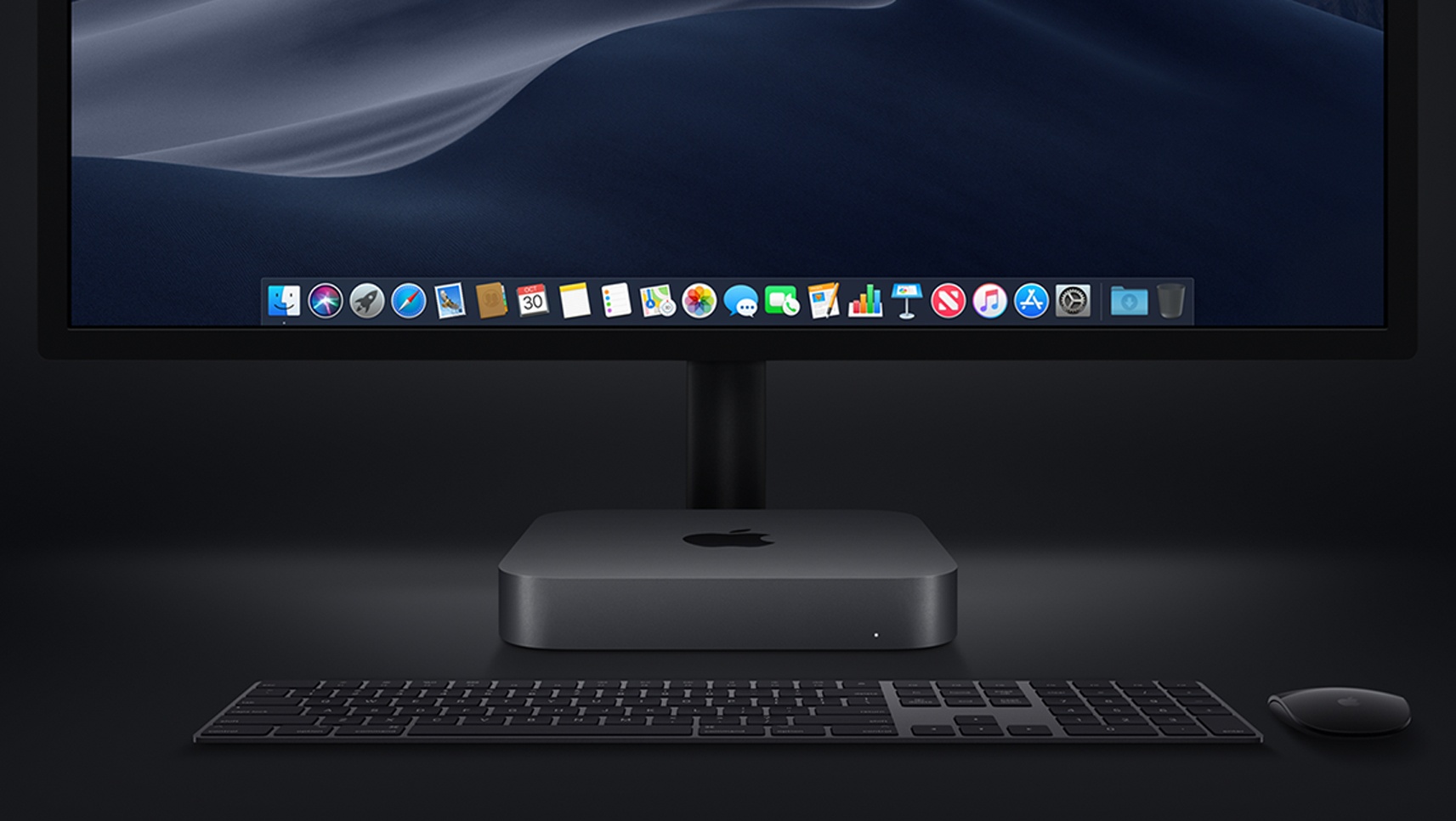 There's a similar story to tell when it comes to the new Mac mini. Apple has gone above and beyond in ensuring demand has been met, enhancing memory from up to 16GB to up to 64GB, bolstering storage to up to 2TB and installing shiny new introducing 6-core and quadcore processors. This time Thunderbolt 3 (USB-C) ports also ensure support for up to two 4K displays, as well as external Graphics Processing Units, while HDMI and ethernet ports ensure is the mini is connective and ready for multiple configurations. Arriving with up to five-times faster system performance, up to 60% faster-integrated graphics and up to 70% more maximum sustained power, the new mini is another addition to be protected by Apple's new T2 Security Chip. The advances make the versatile devices perfect for everything from casual to professional use - but it's in the convergence of mini devices that we are particularly excited concerning business use. Owing to additional speed and power, the device's potential for organisations that employ build or rendering farms is unprecedented, reinforced by Apple Senior Vice President of Worldwide Marketing, Philip Schiller, statement that: "Mac mini customers are going to flip over the new Mac mini."

The iPad Pro is a beast.

"It will make you rethink what the iPad is capable of. And what a computer is capable of." It's a bold statement. But when the latest iPad Pro is faster than 92% of all portable PCs sold in the past year, why wouldn't you be left wondering how a device as sleek as the iPad can be so powerful, let alone how your dodgy old notebook can be so guff? The iPad is already the world's most popular tablet. But yet again, Apple has shown they aren't about to rest on their laurels, introducing their most significant changes since the iPad's first launch. 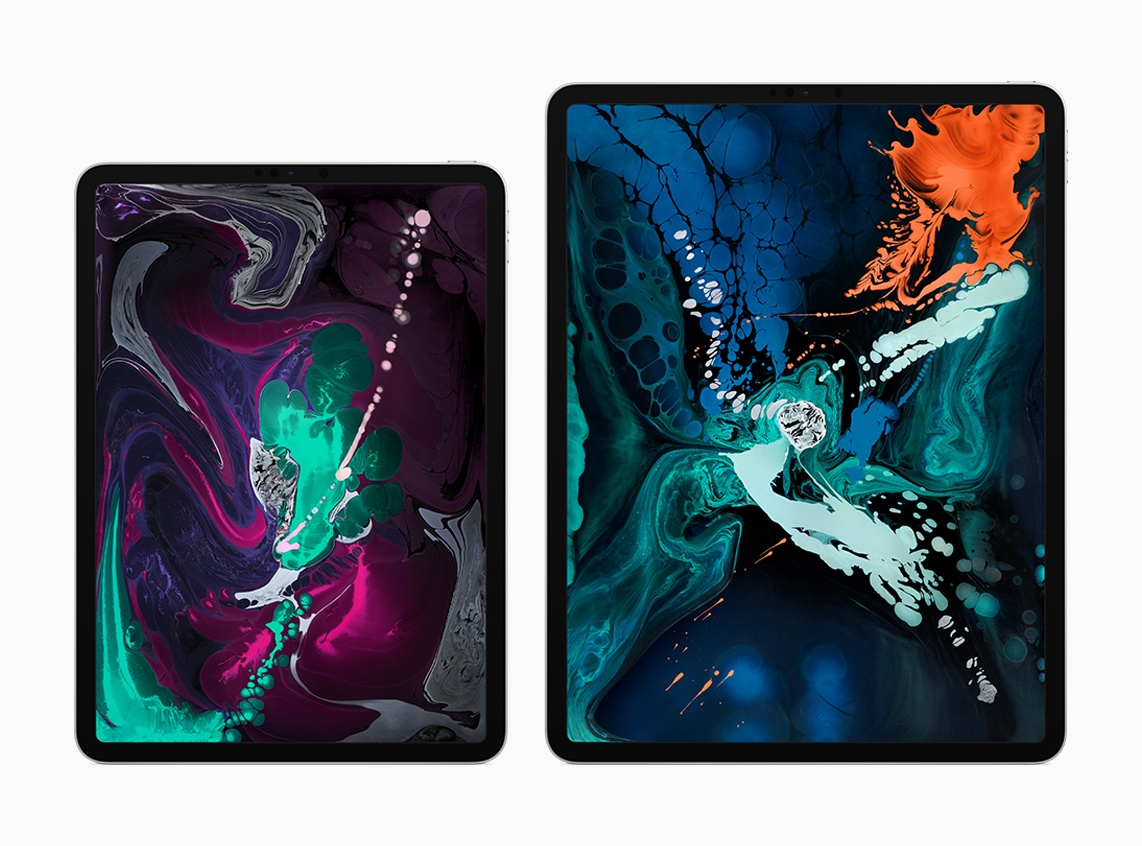 Design changes include a screen that now stretches almost edge-to-edge thanks to dramatically slimmer bezels. The home button is no more as Apple introduces Face ID. Screens come in the same liquid retina form as the iPhone 10R. Amazingly, the device is just 5.9mm thick. Apple has squeezed 250,000 more pixels into their 11" Pro, yet lost 25% total volume from their 12.9" version. The engine is powered by A12X Bionic - Apple's smartest and most powerful chip of all time. This is the beast that makes the device more powerful than most laptops, capable of running 5 trillion operations per second and enables machine learning. The new Pro has an 8 core CPU, all of which can be used simultaneously and when paired with that A12X makes multitasking seamless. The Bionic also helps deliver graphics that are twice as fast, and with storage capacity now boosted to up to 1TB, suddenly the iPad appears even more versatile. USB-C ports are in play once more, with iPads now capable of charging outwards, meaning you can give your iPhone extra juice on the go. Of course, the new Pro also supports Apple Pencil 2, which can be easily clipped to the device thanks to magnets, and wirelessly charged while stationed, and there's even a redesign for Apple's smart keyboard folio. Again, the enhancements to the gadget leave us wondering whether more professionals might switch up how they work over the coming years. But it isn't just the thought of iPad-laden offices that has us excited concerning their use by enterprises...

How the iPad Pro unleashes creativity. 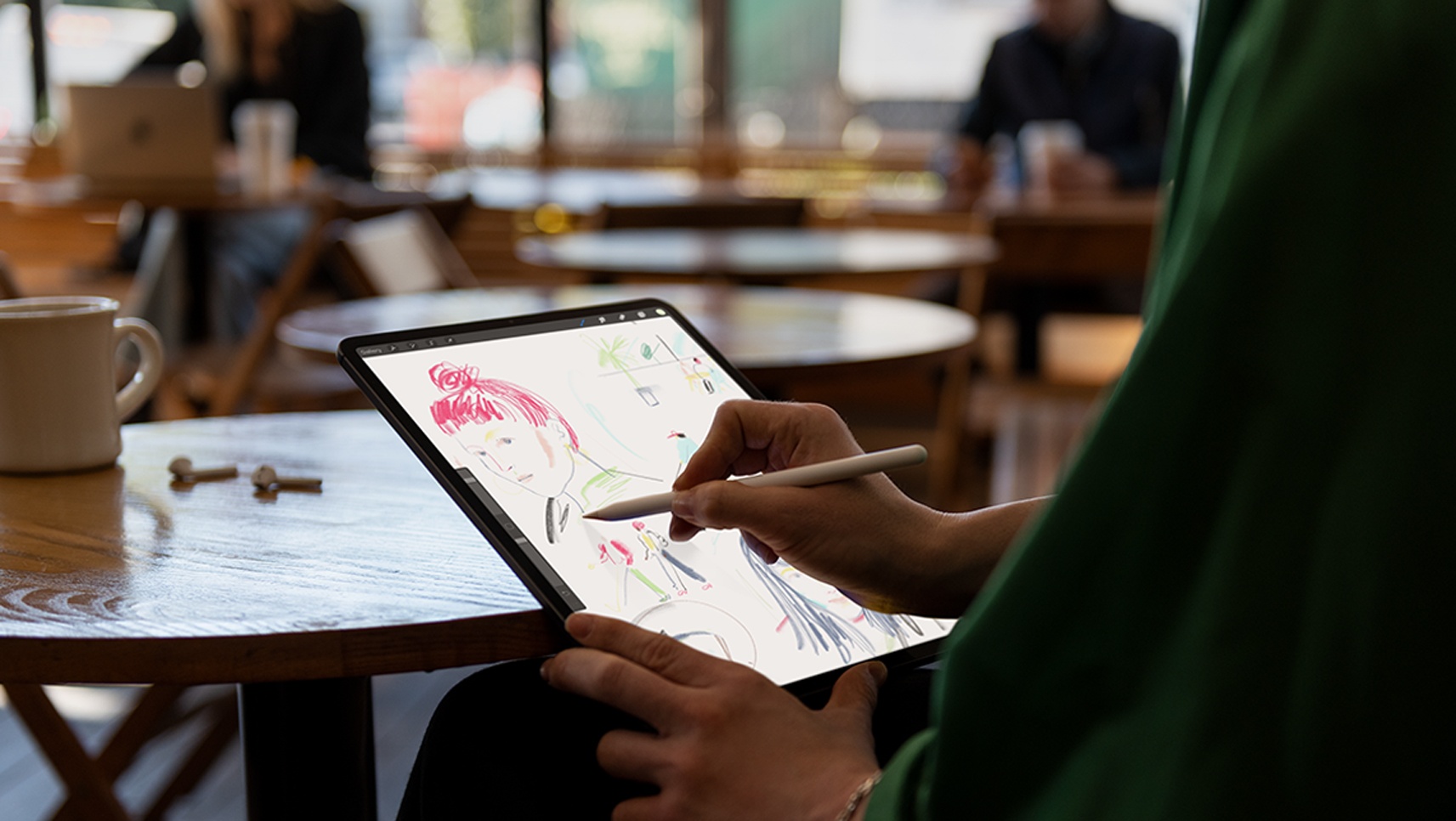 Though all three product releases contribute quite clearly to Apple's mission of providing people with the tools required to unleash their creativity, we believe the iPad Pro will prove to be the jewel in their crown over time. Apple confidently declared the new iPad Pro as the "world's best device created for augmented reality" (AR), a statement backed up not only by June's unveiling of ARKit 2 but so too optimisations and calibrations to the new iPad's camera. Indeed, it was the early glimpse into the power and capability of the devices afforded to us by Adobe and 2K Games that got our tails up. First up was Adobe's VP of Design, Jamie Myrold, who confidently toyed with Photoshop on stage. The speed and efficiency of the programme demonstrated something that iPad's have perhaps lacked for years: an ability to accommodate more intensive applications. Concerning the point of iPad-heavy offices, this will inevitably raise a curious eyebrow or two. 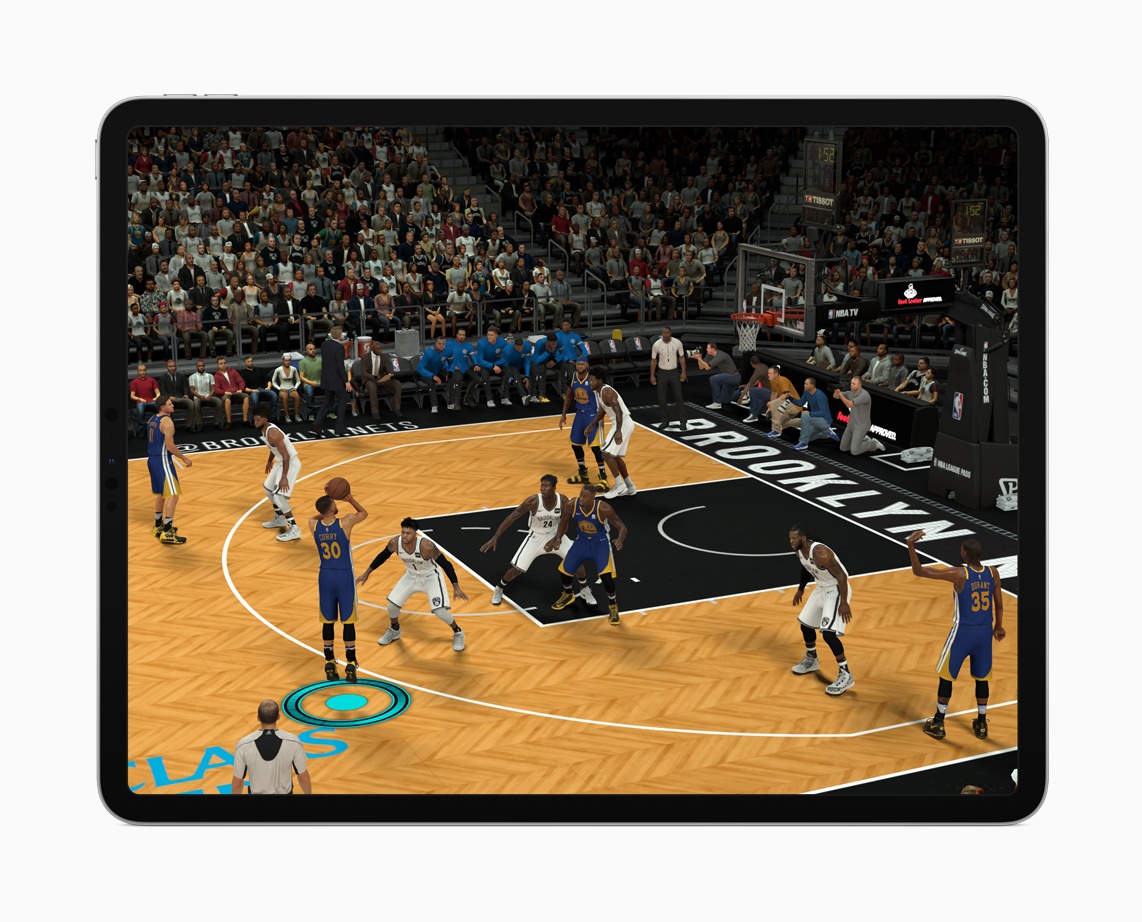 Closely following the Photoshop demo was another, Project Aero, the company's new AR design and publishing tool. In addition to establishing the application as one that can allow users to enjoy more 'traditional' AR experiences such as walking through a scene, it quickly became apparent how iPad Pro users can animate and introduce interactive elements to work. That this was all done so impeccably is a testament to the performance of the new Pro. And that wasn't everything, either. 2K Sports President, Greg Thomas, was also on hand to show their upcoming NBA 2K game hosted on the device. Capable of running at 60fps, this was merely another demonstration of the iPad's incredible performance.

Why it's time for you to unleash creativity.

It is this level of execution that we expect will make enterprises sit up and take notice. Speaking from personal experience, it can be frustrating to land in the App Store and find some of your favourite apps are nowhere to be seen. Now, companies have no excuse. The latest iPad is the most impressive yet, and the versatility of the product should see Apple expand their dominance of the market quite extensively. Organisations that ignore that imminent growth face being left behind by rivals who might be quicker to move. The new iPad Pro lands as soon as November 7th, and we're sure you're aware that quality app development isn't a particularly speedy process. If you're an organisation looking to learn more about how to take your app to iPads, you'd be wise to get in touch with our commercial team - besides, there's a reason we're rated so highly at what we do. 😜

Which was your favourite announcement from October 2018's Apple Event? Let us know over on Twitter, @hedgehoglab.