“Earlier in my career, I was taken along to meetings as a "pretty face" - a senior male colleague openly said this to me in an open office. It felt pretty degrading, given I knew I had more to offer.  Now, I recognise that being a female in tech gives me an advantage, an edge.  My voice doesn't sound like many peers (particularly in commercial roles). I can immediately stand out in more important meetings and events, but my experiences and stories aren't the same. I can establish the space safety and permission to talk to colleagues and clients in a way that builds trust, safety and transparency.

I was so pleased that hedgehog lab hired me, knowing I was having a baby.  Not many organisations would be willing to take a risk like that - bringing a senior person into a client-facing role knowing they would be out of the business for up to a year.  It felt courageous but incredibly empowering too.  Now that I've returned to work, my struggles as a working parent are understood, accepted and accommodated by leadership, colleagues and clients.  I think being open and honest about my situation helps with that.”

“At school, I was top of my class, my GCSE grades put me in the top 3% of the country, and things looked promising for me and my future career, whatever I chose that to be. However, things took an unexpected turn, and my son was born in the summer after my first year at college, changing my life for the better and altering the path that my life took.

After years of retail and management positions, I decided to move into People and HR, which eventually led me to hedgehog lab. My work experiences as a young mum weren’t always easy in the past. I faced bias and judgement in many forms along the way and fought hard to challenge that. My experiences at hedgehog lab have been really positive. It’s refreshing to work for a company that cares so much about its people and who they are as individuals. They gave me a chance, saw past my non-traditional journey into my specialism and trusted my skills and worth.My purpose is to do right by our people here at the lab, to fight for equality in the Technology sector and beyond and to continue to help break the bias for women everywhere.” 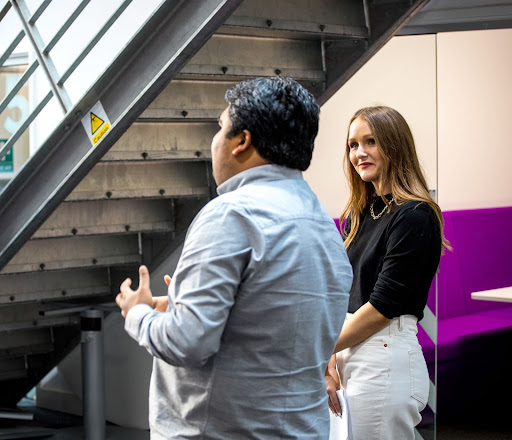 “I started my career as a Marketing Assistant in a small company in Cyprus. After a couple of years, I moved to my first significant position as Marketing Manager for Domino’s Pizza in Cyprus, where I stayed for 3 years. Following that, I was interested in learning more about the digital world. Hence, I decided to move to a multinational company and become an Account Manager. About 2 and a half years later, I now find myself in Newcastle on a brand new adventure with hedgehog lab!

I was really fortunate with all my previous workplaces. I am happy to say that chances were given to everyone equally and whenever I had the opportunity, to myself too. Still, I know this is not always the case.

Having studied at the Cyprus University of Technology, some women were interested in careers in Technology. Still, there could have been a lot more. It’s up to us to choose to be part of it moving forward. ”

“Growing up, I was aware of my disadvantages due to socio-economic bias. During my school years, potential grades were predicted by postcode, parental income etc. As I am one of six kids (four of us are female), and my Mam raised us on her own in quite a rough area, I was the perfect candidate for low predicted grades. This never troubled me. It was just an accepted part of my life. However, I vividly remember the first time I experienced bias because of my gender. It had never occurred to me before that I would be treated differently for this reason.

I always was top of the class when it came to English Literature. I only scored A* on mock tests and was highly confident in my own ability. However, when it came to being placed into sets for GCSE year, I was placed at the bottom with a boy, another high achieving student.  We were amongst children who had very low reading ages, and some couldn't read at all. It was apparent that the system of placing kids by their postcodes wasn’t working. Luckily the school picked up on this. There was one place left in the highest set and one in a low-mid set. The administrator sorting this situation explicitly said that they should give the top set place to the boy, simply because he was a boy and would “do better” in that class. There wasn't anything else to influence that decision bar my gender.

This anecdote is such a microcosm of a more significant issue. Of course, as an adult, the troubles of 12-year-old me pale in comparison; however, this had a lasting impact in my teen years and is a bias I am still conscious of today. I  really struggled after that with the knowledge that I was ‘disadvantaged’ both because of my life at home and my gender, something over which I  had no control. It wasn't until I became the first person in my family to go to uni (to study English, of course) that I began to explore and understand why the bias against me made me feel ashamed-why would I change my accent to be less broad, why would I be over conscious about what I would wear etc.? I was so afraid of being judged. Being at uni built my confidence- with the help of some fantastic male and female tutors, I became outspoken, embraced my broad accent, and did not shy away from public speaking and volunteering for university tours for the disadvantaged. Working on my confidence and self-worth despite the bias that naturally occurs to those of my gender has given me an education and career that I can be proud of and have achieved despite the obstacles I was born facing. All of this has contributed to me ending up here at hedgehog lab. I can honestly say that the environment I have worked in so far has been incredibly supportive, inclusive and inspiring. It is so important to foster environments of inclusivity, and hedgehog lab provides a safe space for me to continue to grow, build on my confidence and break the bias.”

“I started out in an app development business when I was 19, organising clinical trials. I then realised how work was managed, and team collaboration was pretty slack. As it was a start-up, clear roles were not in place. So I worked with some developers to understand project needs and put together a presentation to the CEO and chairman asking him to send me on a course (CSPO) and the pros of letting me manage the workstreams using my new qualification. I had definitely had experiences in the past where primarily due to my gender and age (I started in the industry when I was 19), sometimes my opinions and ideas were overlooked, and I was often patronised. I felt like I had to shout extra loud and be extra firm to be taken seriously and understood. I had many occasions where my idea was rejected. When a more experienced male colleague made the same suggestion as mine, it was praised and considered. Although at first, this was frustrating, I was able to channel this frustration into really mastering my project management toolbox, succeeding in managing several projects, gaining respect from my peers and really driving to prove people wrong.

I do feel like things have improved from when I began my career (8 years ago), and I do now feel like I am considered equal to my male counterparts on most occasions. This could be due to my experience, qualifications, or even successful projects under my belt. I still think it is essential to acknowledge that this is not how every woman in a workplace will feel. We should continue to ensure our workplaces are inclusive despite genders or other qualities. We should also strive to not only change the gender bias but build environments where women feel empowered and supported.”

Our commitment to diversity, equality and inclusion

People are our greatest asset at hedgehog lab. We’re working to improve our approach to DEI as a business. We strive to make our workplace welcoming and inclusive. To learn more about our efforts to date, you can check out our Inclusion page here.

Come and join us

Fancy joining the hedgehog lab team? We can’t wait to have you on board! Come and be a part of the action by browsing our open vacancies to see if there’s a role for you.

If you’d like to learn more about our company culture, check out our blog post on how we’re leading the way in flexible working and supporting our team’s mental health and well-being.