Wearables - What category do they fit in?

Since so-called ‘smart wearables’ were first launched some time ago, digital firms have attempted to divide them into various categories as a means studying the products themselves and the growth of the sector.

One such example is the work carried out by the IDC (International Data Corporation) who broke down wearables into two major markets - smartwatches capable of running third party applications (think Apple Watch, Pebble Smartwatch, Samsung Gear S3 and Motorola’s Moto 360) and basic wearables, such as wristbands, clothing and even glasses, which lack this facility.

Growth of smartwatches and wearables - what do the numbers say?

Launched to much fanfare in 2013 and 2014, smartwatches were touted as tools capable of changing consumers’ lives. According to the digital firms behind them, they were the very embodiment of convenience, bringing health, retail and gaming apps to small devices on the user’s wrist. Naturally, healthcare providers, retailers and those within the gaming industry were also excited about the opportunities this new technology could bring.

Of course, the market surged quickly as consumers began to experiment these intelligent gadgets. Soon, though, many felt disillusioned with the limitations of the tech, complaining of connectivity problems and about the apps themselves - which were device-specific rather than built for cross-platform functionality. Hence, following an initial spike, growth began to slow.

As the graphic shows, it is predicted shipments of basic wearable hardware will grow on average by 17m units annually between 2016 and 2020, while smartwatch shipments will see an average rise of 13.7m. The numbers do confirm that consumer demand is set to rise much slower than manufacturers had anticipated. 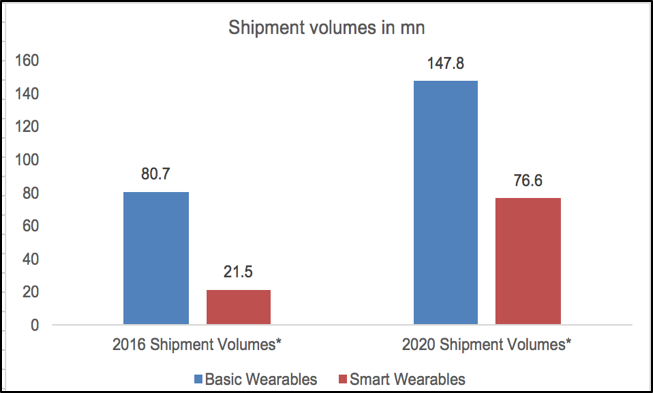 Lessons to be learnt

The pertinent question, therefore, is: will slowing demand, combined with rising consumer expectations, sound the death knell for smartwatches? We do not believe so - and, in fact, predict that in the coming years, smartwatch manufacturers will make a point of raising the capabilities and functionality of their products, providing an impetus for growth. They, along with app developers, retailers and enthusiasts will likely also learn a few lessons from what has happened so far:

In conclusion, we believe this is an extremely nuanced market and, and while it hasn’t grown as fast as hoped, there’s no need to press the panic button. In fact, when technology fatigue fades from consumers’ minds in the long-term, the sector will look as bullish as any.

- THE SMARTWATCH REPORT: Forecasts, adoption trends, and why the market isn't living up to the hype

- Is the smartwatch market tanking or on a long, slow climb?