Apple's iOS App Store may contain millions of first and third-party applications, but both mobile app developers and consumers alike have long considered the App Store to be fundamentally broken from a search and discoverability perspective. Over the years, the Cupertino-based company has been seen to be acquiring smaller tech companies with a focus on search technology - namely Chomp in 2012 and OttoCat in 2013 - leading many to believe that it was only a matter of time until this purchased expertise was integrated into the existing App Store to the benefit of all who use it.

While we are yet to see a noticeable overhaul of the underlying search technology and algorithms that power the App Store, what we have received is confirmation last month that changes are indeed coming.

Prior to this year's Worldwide Developer Conference in San Francisco, Apple confirmed that it was about to introduce paid search ads to the App Store. This, in short, means that developers will be able to pay to have their application shown in an advertisement block at the top of App Store search results. Public opinion on the validity of the ads and whether or not they are a good or bad thing differs hugely at the moment. However, Apple insists that Search Ads will be an "efficient and easy way" for developers to promote their app within App Store search results, while still respecting user privacy.

We certainly aren't here to debate the validity of these Search Ads, and whether or not we feel they will represent a fair and efficient way of assigning discoverability to an app, but rather to take a closer look at the new integration. Without further ado, let us shine a little light on what Search Ads are, and how they will actually work.

Apple Search Ads: The Why

You can't help but feel that part of "the why" stems from Apple's reaction to the public perception that its App Store is generally a broken platform. This could be a knee-jerk reaction to appease developers, or it could be a well thought-out solution that could genuinely improve the situation. The official line out of Cupertino is that the new Search Ads will give "every developer the opportunity to promote their app at the top of relevant search results." Browsers will then be able to download that promoted app with a single tap.

Search Ads will adhere to Apple's strict privacy standards, meaning that user information is kept secure and out of developers' hands. This will make Search Ads effective, efficient and secure, at least in Apple's eyes. It seems that Apple wants to provide developers with an extremely easy way to promote their own applications without adding restrictions onto that promotion. They can invest as much or little as they desire. They can start or stop the ads at any time from within their own dashboard. There's no minimum spend to be able to take part, and importantly, there's no minimum-term commitment. Mobile app developers simply dip in and out as they please to give their app a push when monetary resources allow.

Apple Search Ads: The How

The "how" bit is remarkably straightforward. As part of the process, Apple has created a number of Search Ad templates and formats that are automatically chosen based on the application that is being promoted. When an ad campaign is created, the ad format is selected with additional information pre-populated from the App Store metadata that already exists against the app in question. This level of automation means it's vital to ensure that the description of an application on the App Store is representative of the actual app prior to starting a campaign.

Apple then uses its own proprietary Search Match Feature to recognise user searches on the App Store and display an advertisement for an app that matches those search terms. That's the interesting part of "the how"; rather than choosing keywords or specifying when an ad will be displayed, developers are essentially paying to be featured in search results based entirely on Apple's behind-the scenes matching abilities. If additional control is required, then Apple does offer the option of choosing from keywords that it generates on the developer's behalf.

Apple Search Ads: What Does The User See? 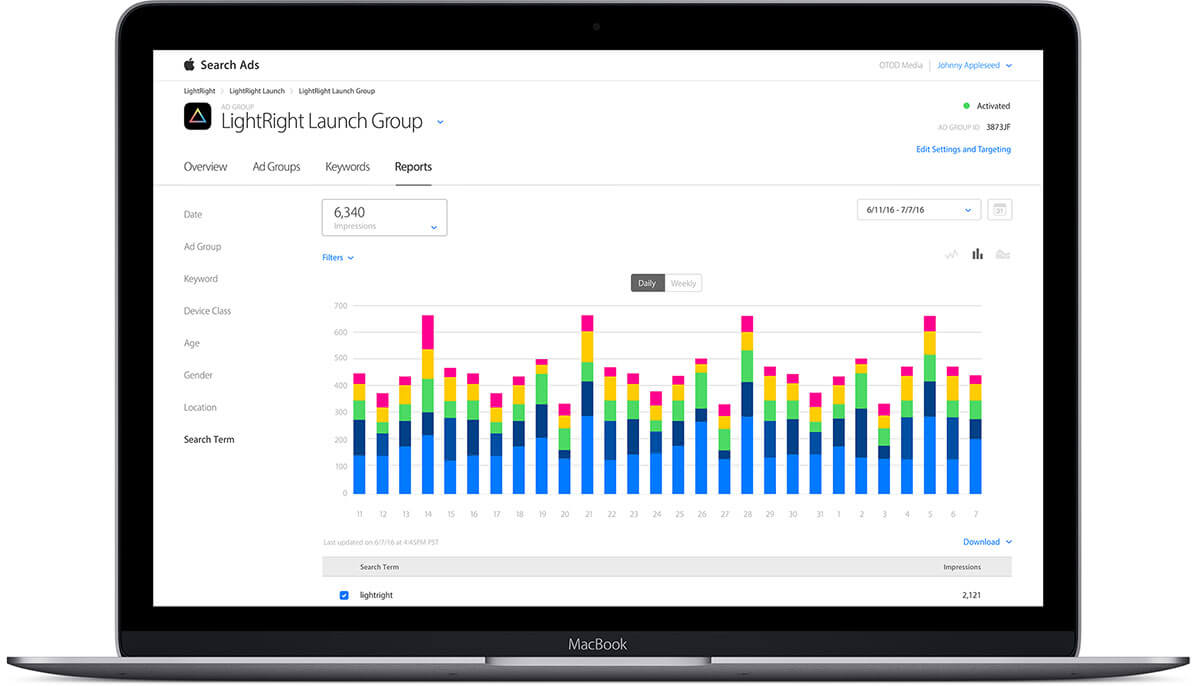 Apple Search Ads are predominantly being pushed as a benefit for mobile app developers to take advantage of - rightly so given the fact that they allow seamless promotion of an app. With that said, let's not forget what is potentially the most important part of this equation: the end-user. The person performing the search. The individual likely to download the app and part with his/her money as part of that transaction. How do Apple's Search Ads affect the user?

The honest answer here is that the integration of Search Ads shouldn't really make a huge amount of difference to the average iPhone or iPad user. It's approximated that around 63% of app downloads come through a physical and deliberate search via the App Store. Functionally and visually, the search mechanism in Apple's iOS App Store will continue to work in the same manner, with the addition of the top result being a very clearly defined "Ad" cell with a promoted app featured within it. The hope is that the user will actually directly benefit from the integration of Search Ads, based on the fact that the advertised app should only be displayed if it matches exactly what they have searched for.

Could we have a Utopian solution here that benefits users and mobile app developers alike? In all honesty, probably not, but the solution is looking like it's here to stay and will ultimately go live this coming September with the public release of iOS 10.