Apple’s “Gather Round” event has been and gone. Tim Cook and his executive team once again took to the stage in the Steve Jobs Theatre to discuss new products and services and to give us a glimpse at the innovative work that has been going on behind-the-scenes over the last 12 months.

Let's dive right in and take a look at the major announcements to come out of the event. 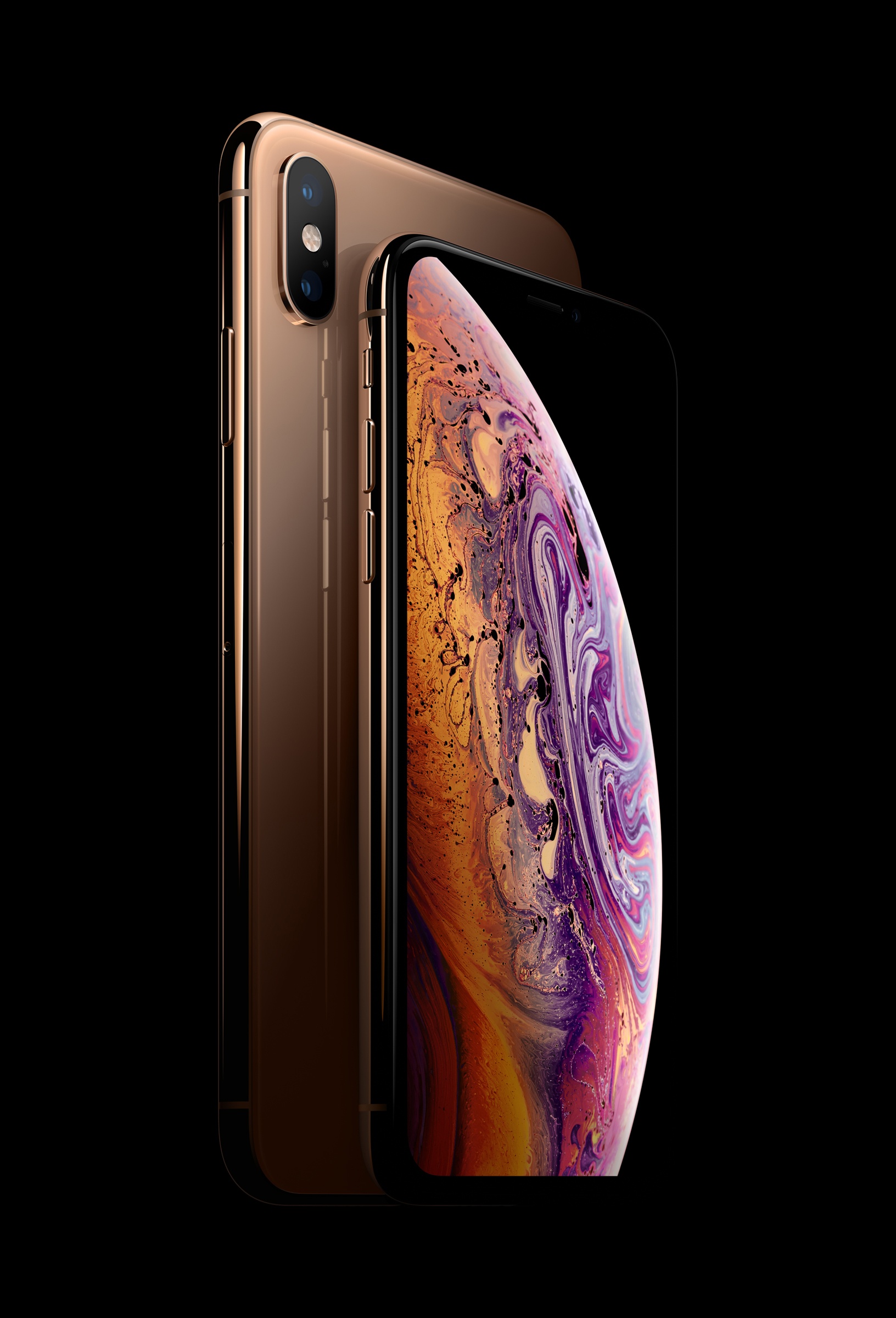 The new iPhone XS and XS Max. Image by Apple.

Apple may not seem to have any real logical or sensical naming convention in place for its iPhones anymore but the fruit company is still pushing out fire from a technology perspective. Both iPhone XS and iPhone XS Max carry on from last year’s iPhone X while adding their own capabilities and technological progression.

This year’s Apple flagship are designed for those who want a lot of screen. With the only real difference being just how much screen you want as a device owner. The iPhone XS comes with a glorious 5.8-inch edge-to-edge display. The larger XS Max - we have no idea why Apple dropped the “Plus” in favour of “Max” - offers a huge 6.5-inch display, which, like its smaller counterpart also consumes the full frontal area of the phone. Both panels are OLED-based, offer 120Mhz touch-sensing capabilities, and come with the usual technology built-in like pressure sensitive 3D Touch and wide colour support. You only need to look at both of these devices to immediately understand that the display is the window right into the soul of the device.

XS and XS Max users can adjust depth-of-field effects after taking a photo. Image by Apple.

And the similarities continue. Both XS and XS Max come equipped with TrueDepth forward-facing camera systems to offer facial recognition to power Apple’s proprietary FaceID functionality. Both devices have a revamped rear-facing dual-lens camera system which opens up a whole new world of possibilities and capability from a photography perspective, such as being able to adjust the depth-of-field effects on a photograph which has already been captured. 4K video-recording is also in operation, as is a new Smart HDR feature that should transform the type of images that are captured on both devices.

The XS and XS Max will both come with improved battery life over last year’s release, offer more durable glass all over the devices, and should offer a level of water resistance that means the devices can be submerged in swimming pools, dipped into a bath, or even splashed with beer when the celebrations get a little rowdy. We wouldn’t encourage doing that, but, if it does happen, you should be able to continue posting glorious photographs and video clips of your pet kitty without any fear.

All of that sounds great, right? And you’re right, it is! But, let’s talk about the brainpower and intelligence that actually powers iPhone XS and iPhone XS Max: the brand new Apple A12 Bionic chipset. This is the first 7-nanometer chip used in a smartphone. It works in conjunction with a generation neural engine to perform real-time machine learning calculations in order to transform photos, gaming, and even cutting-edge augmented reality experiences that wouldn’t have been possible with earlier chips. It comes with 2 performance cores and 4 efficiency cores to ensure that it’s faster and more power efficient than previous generation chips. It has an 8-core architecture, performs up to 5 trillion - yes, trillion - operations per second, and is capable of running Apple’s CoreML frameworks up to 9x faster than the previous chipset. In short; it’s faster, better, stronger, more efficient, and is an absolute champion of chip engineering. 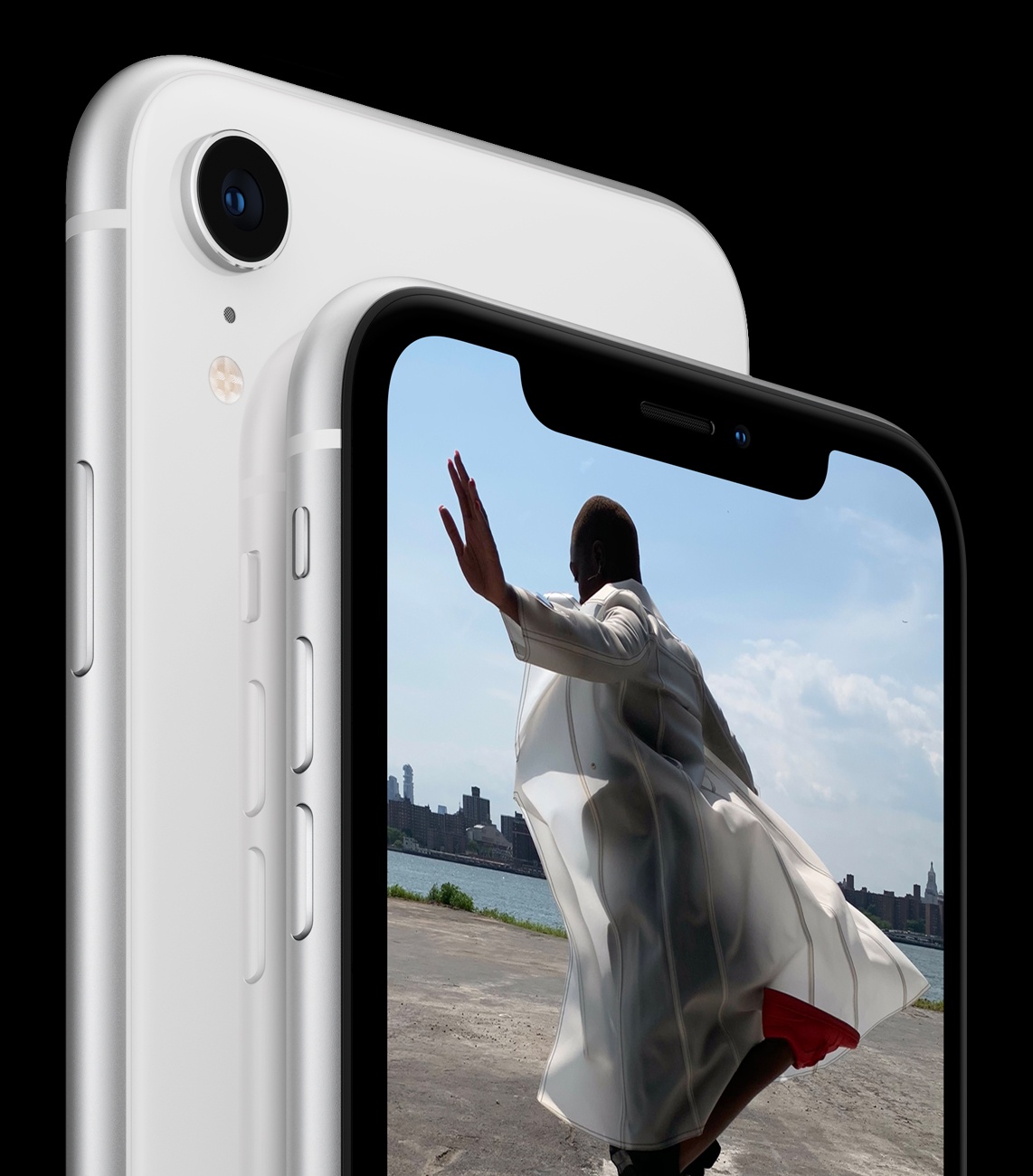 The more affordable but just as impressive iPhone XR. Image by Apple.

One of the amazing things about iPhone XR is that Apple has managed to deprecate Touch ID and fingerprint detection before other companies have even managed to perfect it on their devices. Apple is also very acutely aware that not everyone is going to want to spend £999.00+ on a smartphone, and has, therefore, produced a more affordable device which has sacrificed certain technologies in order to make it affordable and globally appealing.

It comes with a stunning 6.1-inch display that, once again, dominates the front of the device. But there are some technological differences from its bigger brother and sister. iPhone XR is based on LCD technology, not OLED, which Apple is calling a “Liquid Retina” panel. iPhone XR should be good for another 1.5 hours of battery life over iPhone 8 Plus, comes with the same A12 Bionic chip that is basically changing the game, and introduces the same glorious Face ID functionality that was made popular on iPhone X and which has continued through to iPhone XS and iPhone XS Max. And yes, that means that the Home button has been removed and Touch ID is no longer a thing on Apple smartphones. 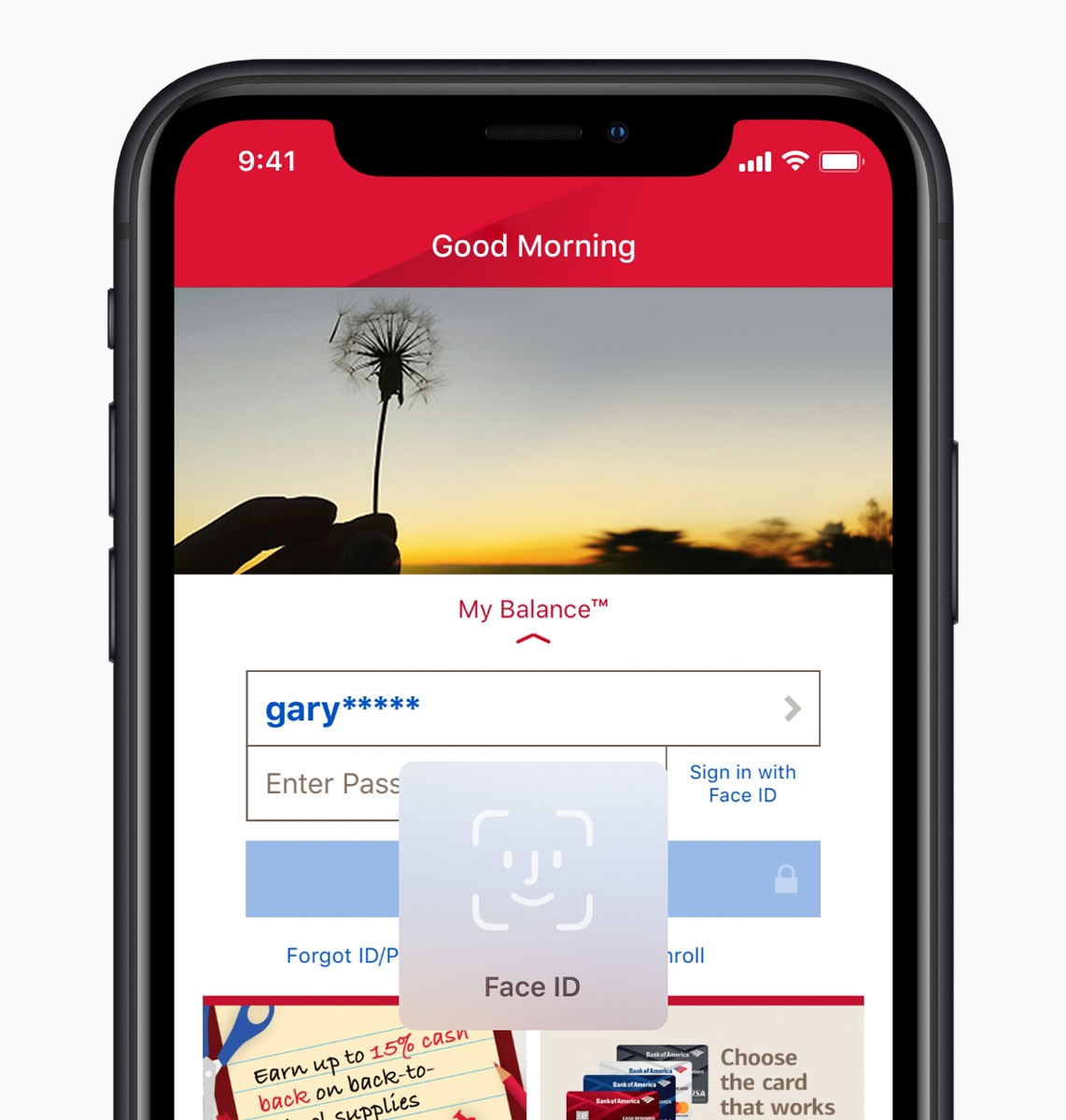 In order to save money and make the device more accessible to the masses, Apple has removed the dual-lens camera from the rear of the XR and built the Liquid Retina panel without the inclusion of 3D Touch. This has been partly counteracted with the fact that certain 3D Touch features have been replicated with a haptic feedback-including touch to try and make the transition as painless as possible.

It’s more affordable. It’s still powerful. It’s a great size and offers a stunning display. And, it also comes in a range of new colours, such as Coral, Yellow, Blue, and Product(RED). 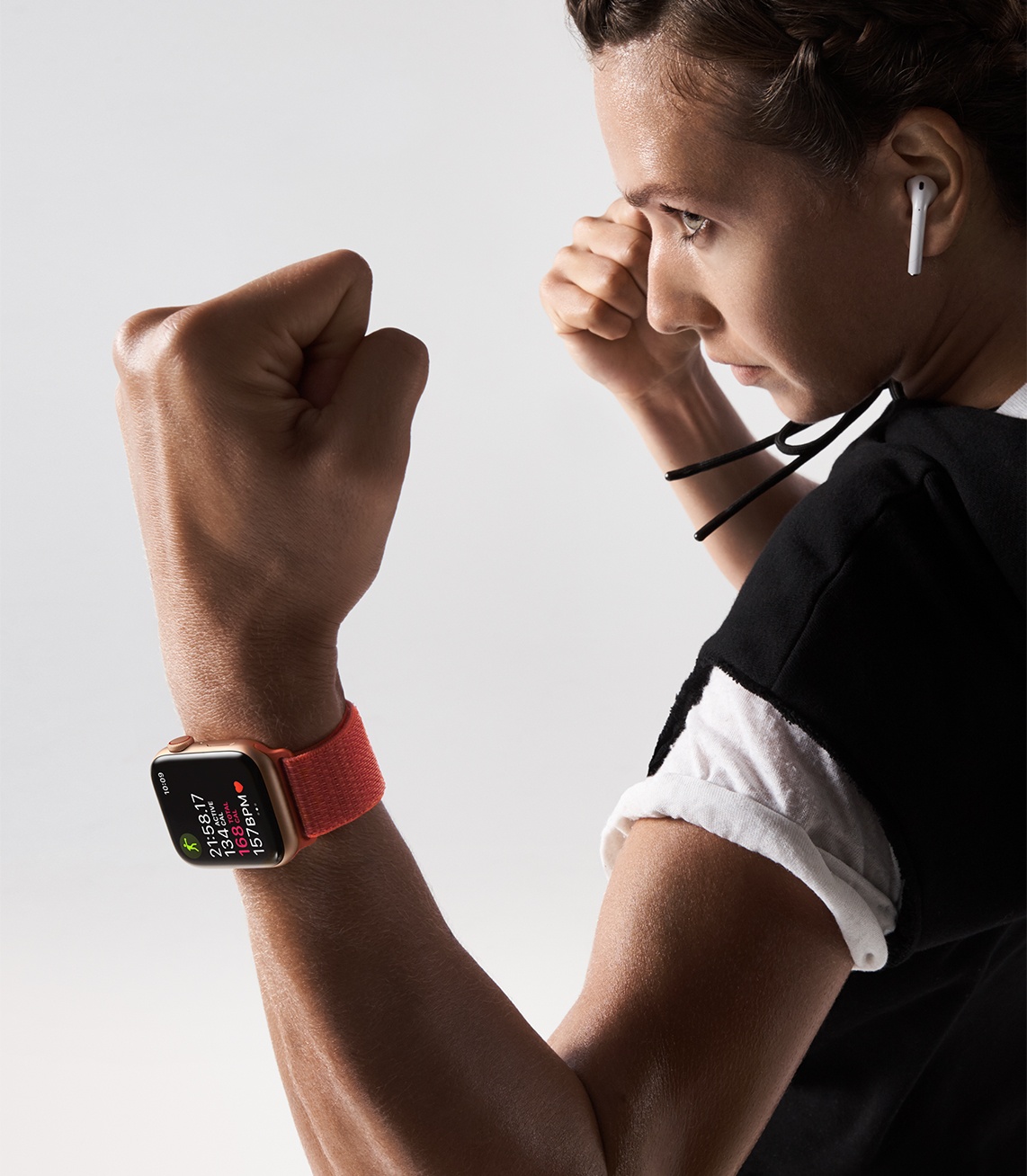 Apple Watch Series 4 is the best smartwatch since… well, ever, to be honest! One of the amazing things about the move from Series 3 to Series 4 is that it’s not just about a simple upgrade or an attempt to steal cash from consumers. Apple Watch Series 4 is genuinely a world-changing, potentially life-saving piece of hardware. And the President of the American Heart Association stood on stage to confirm that claim. 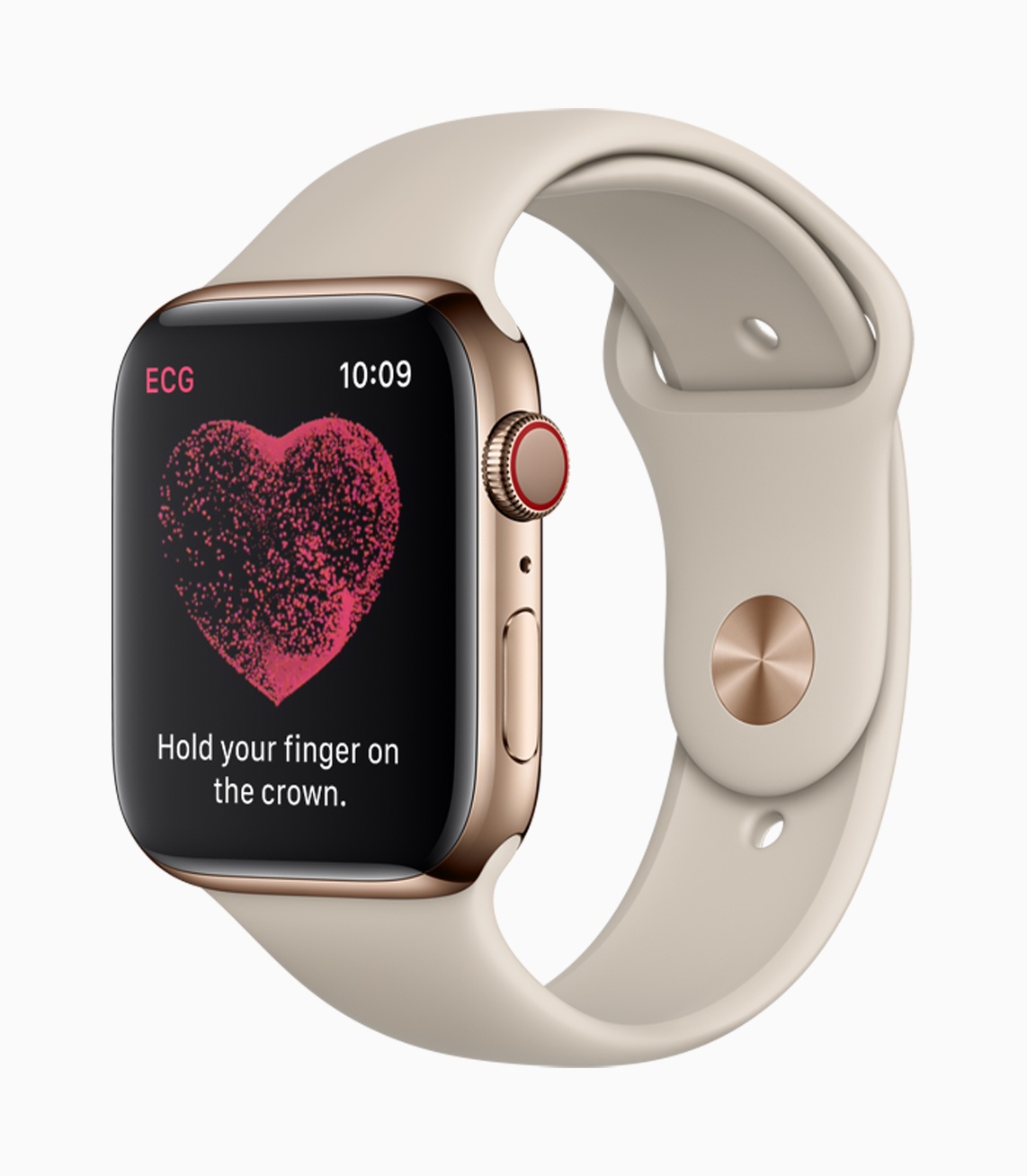 The intelligent wearable's are capable of performing electrocardiogram. Image by Apple.

Apple Watch Series 4 is thinner than previous models and comes with a bigger screen that removes bezels and uses the curvature of the physical hardware to make gains. In fact, it has made gains of 30-32% depending on the model that you buy. It comes with an improved Digital Crown that now has haptic feedback built right into it for a more premium and mechanical feel when interactions take place. The hardware also comes with a new 64-bit-dual core processor that offers twice the performance speed and which works alongside a suite of new and improved sensors to ensure that additional data and metrics can be tracked and stored securely.

Those new sensors allow Apple Watch Series 4 to determine if a wearer has had a fall and call the emergency services with a location, as well as track the status of your heart and provide you with notifications if your heart rate is too low or if the rhythm of your heart is irregular. It’s also capable of performing and plotting a full ECG which ties directly into the Health app and has FDA approval in the United States. We’re just going to leave that one there! Ladies and gentleman, boys and girls, the potentially life-saving Apple Watch Series 4. 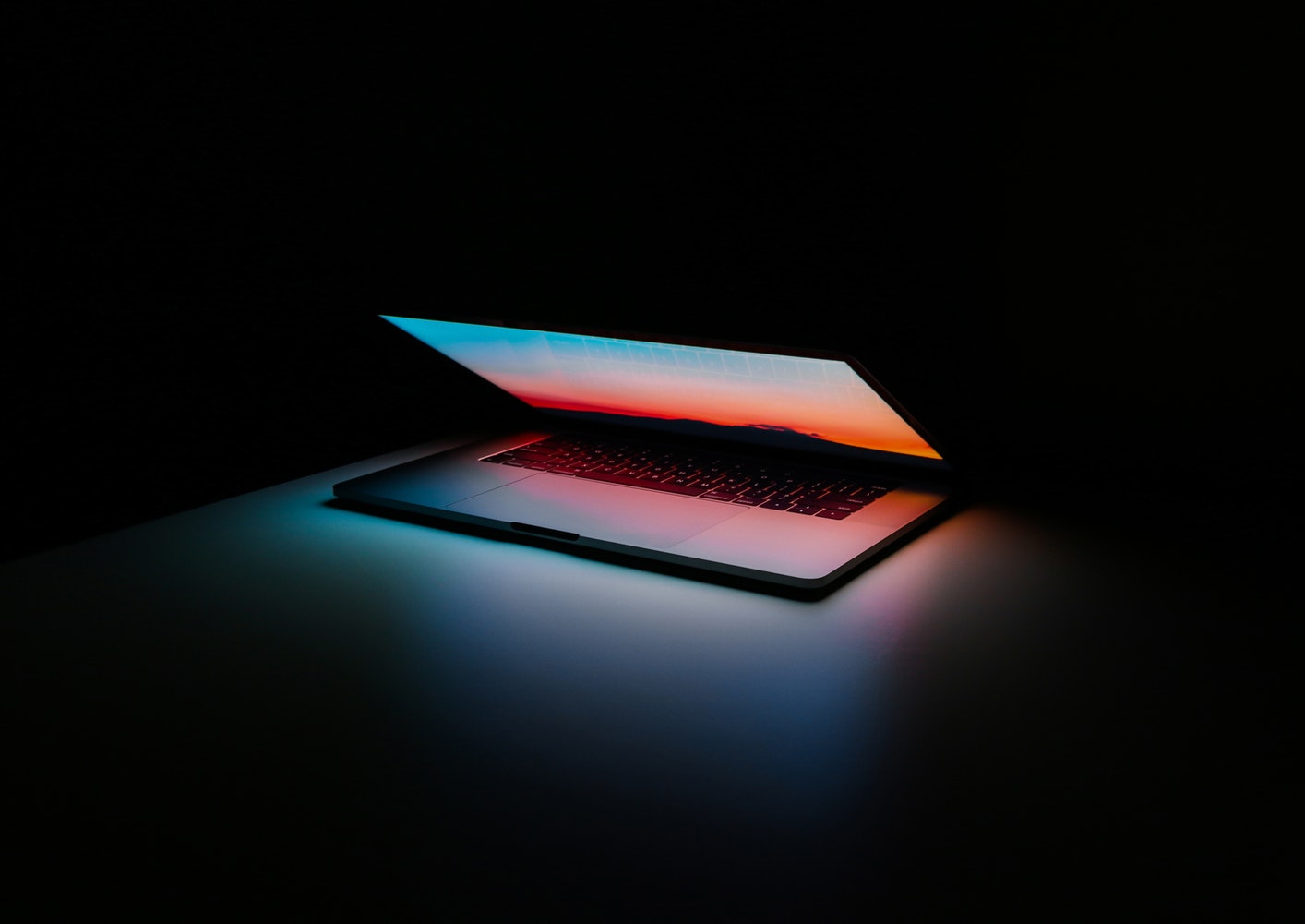 More is still to come. Image by Ales Nesetril.

Apple’s new hardware is great. But that hardware would be nothing without the software that powers it and exposes a lot of the functionality. The iPhones iOS 12 platform has been in test since June of this year with developers and public testers and will be officially released to the public this coming September 17th.

The next-generation of macOS - macOS Mojave - will be released for general consumption seven days later on September 24th and will be compatible with a decent subset of Apple iMacs and MacBooks. The installation will immediately reveal an excellent array of improvements and enhancements for all compatible Mac owners.

And if you have a HomePod, existing Apple Watch, or Apple TV, then you can expect a few software releases for those, too. Pre-release versions of HomePod firmware, tvOS, and watchOS will be pushed live to the public in the coming days, meaning that new functionality will immediately be exposed without having to purchase any new hardware.

What was your favourite announcement at Apple's 2018 Gather Round event? Let us know by tweeting us @hedgehoglab.