As regular readers of our blog will know, we're huge fans of immersive tech - Virtual Reality, Augmented Reality and Mixed Reality - which we believe will shape the future of business and entertainment. The research backs us up; according to the data platform Statista, headset sales will hit US$3.2bn this year, and accessories sales US$564m.

Meanwhile, a number of powerful devices - from the Oculus Rift to Nokia's Ozo - are gaining market traction. And, through the likes of The Void, we're seeing how so-called 'hyper reality' experiences can be offered in entertainment settings far removed from the home.

It's little wonder, then, that a growing number of events are dedicating a serious chunk of their agendas to immersive tech developments, from Mobile World Congress to the Game Developer Conference, which hosts a sister event aimed at VR developers. Much of the talk recently has been about the innovations in hardware - so let's have a look at some key announcements.

1. Oculus has cut the price of the Rift

Since its launch, the Oculus Rift has been among the leading VR headsets, offering a high end experience - for a high end price tag. The company, however, has reduced the latter by $100, both for the headset itself and for the Touch motion controllers. That means the whole system can be bought for$598. Not exactly cheap, but considerably less expensive than the HTC Vive, and just $100 more than the PlayStation VR. In our view, this should open up new avenues for the tech, bringing quality Virtual Reality to a much wider market.

In 2016, Microsoft said it would be partnering with device makers to launch a VR headset that would pair with Windows 10 PCs running Windows Holographic Shell. The company has now confirmed development kits will be released this month, with the headsets themselves following before the end of the year. The devices, which start at $299, will be built to be tethered to desktops/laptops and, acting like external monitors, will provide an opaque view that cuts off the user's physical surroundings. This, of course, contrasts to Microsoft HoloLens. which blends virtual 'holograms' with full visibility of the real world.

3. New Gear VR will have its own controller 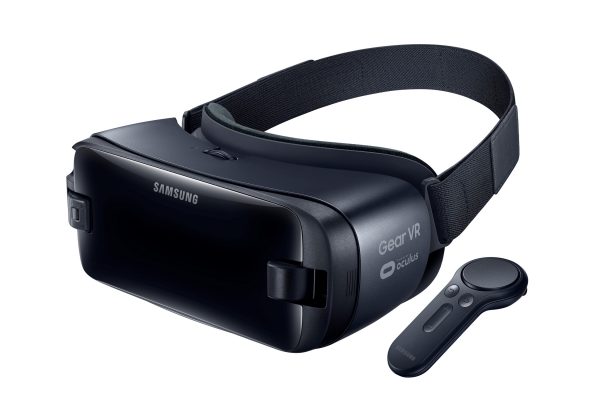 Samsung will soon release a new version of its popular Gear VR headset - with an interesting twist... This one will have its own handheld controller, enabling one-handed operation and offering significantly improved motion interaction. According to the company, this means "minimised head movement for a comfortable user experience".

The controller, powered by Oculus, will also include a home button, volume rocker and back button, trigger button and circular touchpad, meaning quicker selection and interaction within VR apps. Motion sickness, meanwhile, will be minimised through distortion correction technology.

As yet, it's too early to comment on how effective the tool will be. But Google will likely be nervous, given the neat, handheld controller included with its Daydream VR headset was one of the strongest selling points of the recently released device.

4. Samsung smartglasses are also on the cards

Not content with serious advancements in the headset arena, Samsung is set to release new smartglasses enabling remote desktop viewing. The use of electrochromic glass also means the kit - known as Monitorless - can switch between Augmented and Virtual Reality capabilities.

Monitorless will connect to Samsung smartphones via Wi-Fi, the phones then connecting to computers through 4G LTE signals. Hence, users will not only be able to see their desktop in full, but use their phones to control it.

Clearly, then, as we have predicted, the Golden Age of VR, AR, and MR appears to be dawning, with the world's leading tech giants striving to make it more accessible, practical and affordable, creating new possibilities and, potentially a booming market. While it's still a case of 'watch this space', we're preparing for growth; if you bring the ideas, we can turn  them into reality.