The long-anticipated launch of Magic Leap’s mixed reality headset (MR), Magic Leap One Creator Edition, was met with much fanfare alongside a dash of apathy from the technology press recently, as the years of hype finally caught up with the Florida-based business.

A testament to how far the technology has come in the intervening years since the company's initial announcement, their first release offers minor improvements over other currently available augmented reality (AR) and MR headsets like Microsoft’s Hololens.

Driven by the likes of Google Glass and HoloLens, and on the consumer-side by smash-hits like Pokemon Go, AR and MR have been thrust into the public consciousness which, in turn, has encouraged increasing sophistication and wider adoption.

In fact, such is the momentum that AR/MR has developed in recent years that a report from global law firm Perkins Coie found that 51 percent of respondents believe AR revenue will surpass that of VR within three years, up from 18 percent in 2016.

VR and AR are often yoked together in the same bracket, but in reality they offer very different benefits and pose different opportunities in very different areas. This may sound obvious but it bears repeating: they are not interchangeable.

While VR has carried the most hype and arguably has more of a wow factor, AR has the jump in terms of wider adoption and availability. Cost and technical requirements are putting a drag on VR adoption for now, where in AR there is no such barrier.

Lower barriers for entry and cost shouldn’t mean AR is viewed as inferior or a halfway house to VR, it is its own distinct technology which is developing on its own path.

For enterprise businesses looking to adopt immersive technology as part of their business, AR and MR offer a range of distinct benefits that set it apart from its more glitzy VR cousin.

Futuristic, Robocop-style graphical overlays are one of the most well-publicised potential uses of AR and are proving to be one of the primary motivations for early adoption.

While the technology is being put to far more prosaic uses than ridding the streets of a dystopian Detroit of violent criminals, the current use cases are no less exciting for enterprise customers who stand to benefit from sizeable efficiency gains. 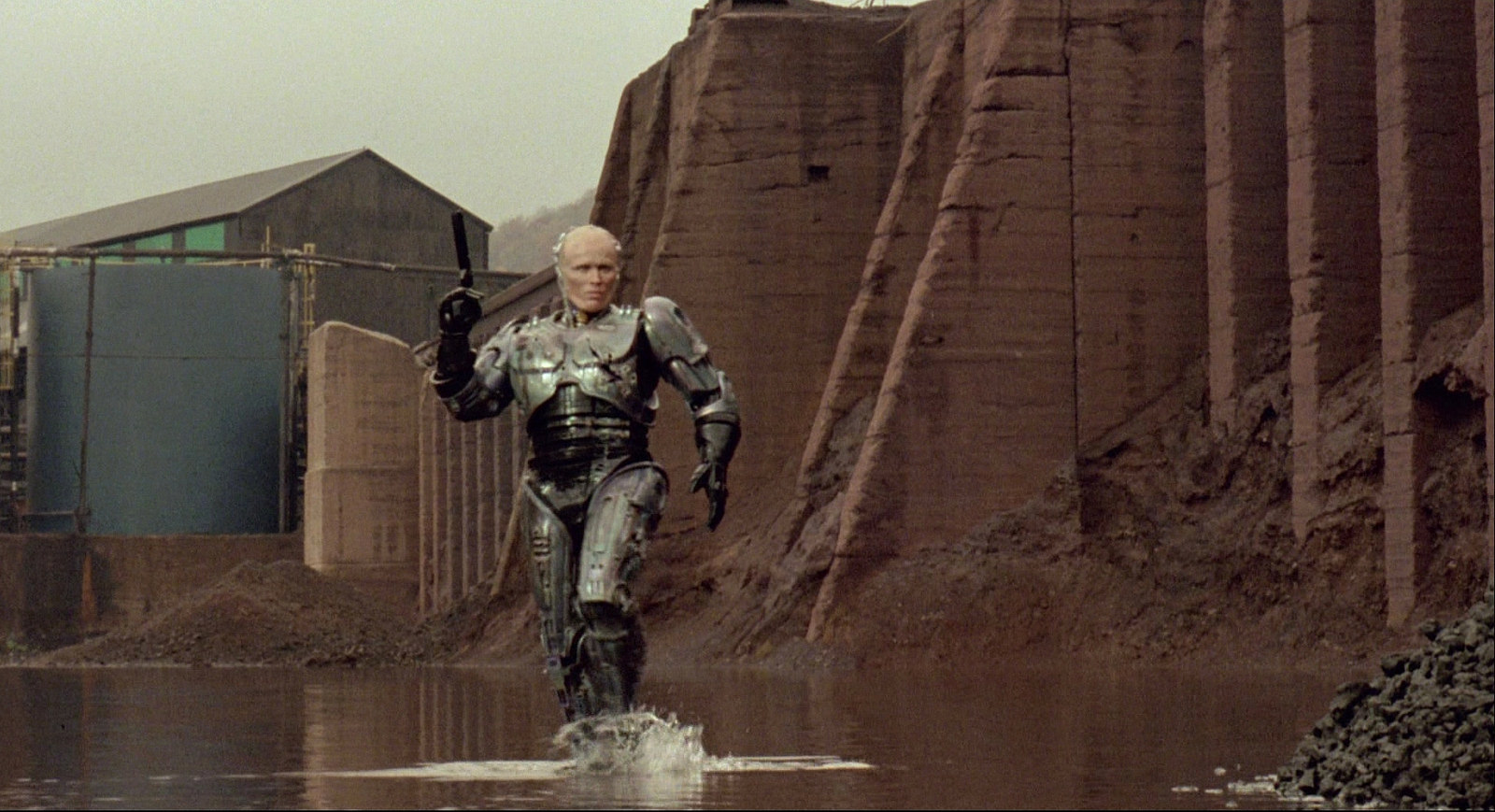 Construction business Caterpillar has trialled its own AR platform that utilises Internet-of-Things (IoT) sensors linked to an iPad app to provide its field service technicians and customers with real-time machinery data when pointed at the relevant equipment.

For industries that require a mix between real-world interaction and screen-based information processing, AR poses enormous potential to deliver information exactly when a worker needs it without them having to pull themselves away from the job itself.

This will be especially true when smartglass and headset technology becomes even more widely adopted, providing a far more efficient way of presenting information than even real-time updates on a smartphone or tablet app.

AR headsets such as Daqri have hit the market in recent years, targeting industrial sectors with their hardy displays. Siemens, Skanska and Hyperloop are already putting the UK startup's headset to use in a range of contexts.

As part of the tie-up with Siemens, employees were equipped with an AR headset to assist them in the assembly of a 1,000lb gas burner where they were provided with step-by-step instructions and 3D visualisations of components.

By providing in-vision guides and information assembly time was dramatically cut down with a novice taking just 45 minutes to assemble a gas burner, a process which would've taken four days without AR assistance.

Workers at agricultural firm AGCO are already enjoying the benefits of seamless information displays thanks to Google Glass. So transformative was the improvement that, according to AGCO Director of Business Procurement, Peggy Gulick, the business retested the technology multiple times as quality and efficiency metrics were so high.

Clearly then, melding the virtual with the actual has the potential to significantly cut down on employee dead-time and busy work. Imagine similar efficiency gains across a whole raft of industries and the potential of such a subtle modification in work patterns becomes clear.

Prototyping and modelling are utilised in a whole raft of industries to test the viability of products and constructions before companies greenlight expensive projects.

But even prototypes and models cost time and money, and wholesale changes to a project can often mean a proposed model becomes rapidly out of date. For building modelling, 3D printing has reduced some of the cost but time-pressure still remains and any modifications to the original design must still be costed in.

The form itself is also a rather abstract one. A 1/10th scale representation of a building, while easier to get your head around than a 2D drawing, still requires a leap of the imagination to conceive what exactly it will look like once completed.

With AR, architects and construction businesses can create working interactive models that mimic not just current 3D models but 1:1 scale representations of how the finished project will look. An approach used to great effect by Gensler when developing their redesigned LA head office. Gensler employees interact with a virtual model. Photo by Trimble

It isn’t difficult to think of hundreds of other potential uses for AR and MR design modelling. Car manufacturing, industrial design, product manufacturing, robotics are just some of the potential areas that will benefit and the list goes on and on.

Even the most innocuous sectors that you might not have considered could benefit from the cost saving and interactivity of augmented reality.

As part of hedgehog lab’s work with multinational paints and coatings business AkzoNobel we looked at an AR concept which would allow boat owners to overlay different colour coatings on their vessels to represent how it would look with a lick of new paint.

In the coming years, surprising implementations of AR technology, such as the one we explored above, are set to become commonplace in the enterprise sphere.

Tweaking of models in real-time

Translating 2D information into more accessible 3D models projected onto real world surroundings is one of the key benefits of AR and MR technology. Inevitably, it is of enormous interest to businesses in the construction industry.

Housebuilders, architects and engineering firms are all in the business of actualising abstract design and concepts into the real world, so it’s unsurprising that so many of them have been dabbling with immersive technology.

Devices such as DAQRI have specifically targeted the engineering and construction sector with their hardier, modular takes on smart glass innovations which are better-suited for industrial use than their more fragile rivals.

Armed with smart glass technology, architects, builders and engineers around the world have been testing out AR for a variety of uses. In Seattle, BNBuilders have been using AR to incorporate 3D models of plans onto the building site itself to give workers accurate representations of where parts should be going and what they should look like. 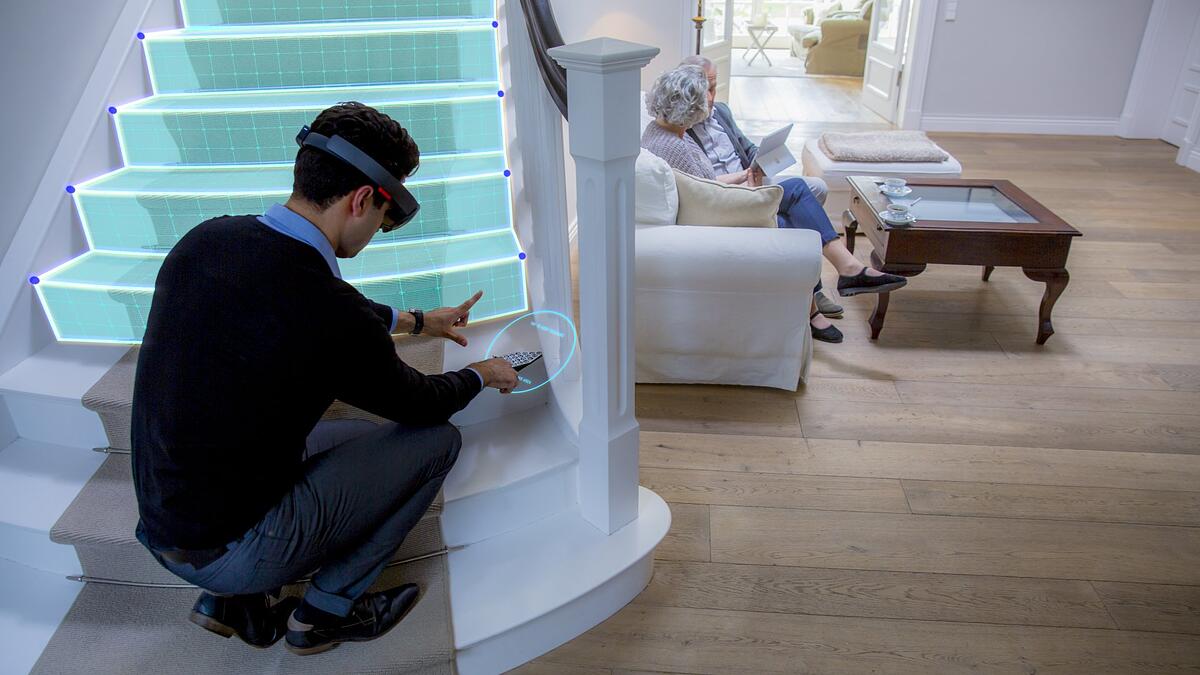 Mock-up of a thyssenkrupp engineer with a Hololens. Photo by Microsoft

On the consumer side, thyssenkrupp has used Hololenses to help customers visualise mobility lifts in their homes while employees are able to scan, measure and share data across teams more easily.

US hardware brand Lowe’s has utilised similar technology in a pilot programme allowing customers to design and adapt kitchen installations in real-time using smart glasses, which it says will help to take the guesswork out of home improvement.

VR is capable of similarly impressive modelling and adaptation of course, but until mapping and processing technology catches up, for many businesses, AR will be their weapon of choice for now. Especially when placing objects in their real-world settings as, in most cases, nothing can substitute for the real thing.

Anyone who has ever purchased furniture from Ikea will know how difficult it can be bridging the gap between written instructions and the baffling piles of component scattered around you.

Multiply that by several orders of magnitude and inject the whole process with significantly higher stakes and you start to get close to what it must feel like to assemble a 277-tonne passenger aircraft.

An errant nut or misaligned screw in your teak sideboard isn’t going to imperil the lives of hundreds of people, but it just might in an aircraft. Which is why quality and accuracy are so crucial in the aircraft manufacturing process.

With such high stakes it’s unsurprising that aviation firms have been quick to test AR innovations and explore their potential uses in the industry. The first to do so was Boeing back in 2015 where, as part of an internal study, trainees working on the construction of mock wings were equipped with animated AR instructions on tablets. 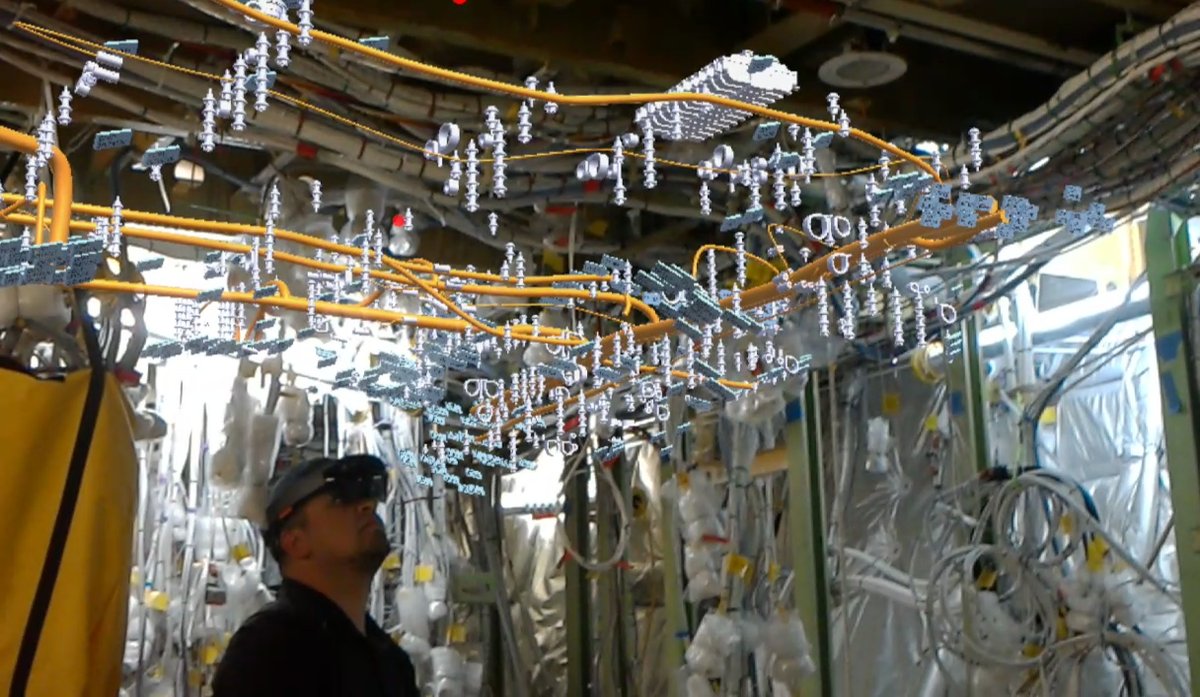 Compared to their fellow trainees who worked either from PDF instructions on a desktop computer or tablet, those armed with the AR tech completed their work 30 percent faster with 90 percent better accuracy.

Building on their findings, Boeing recently unveiled the results of a further test involving AR smart glasses and 3D wiring diagrams which demonstrated similarly impressive numbers. A task which previously required technicians to analyse a 20ft two-dimensional diagram and translate it into 3D space could now be displayed and manipulated right in front of their eyes.

By providing step-by-step guidance without having to look away from the task at hand or by overlaying complex diagrams onto the work area, complex tasks can be completed significantly quicker with far less errors. And the potential use cases for such an approach are practically limitless.

If you’re an enterprise looking to adopt immersive technology as part of your business operations, whether for internal use or your customers, you’d be wise to think carefully about your requirements.

Don’t fall into the trap of using the terms VR, AR or MR interchangeably. As we’ve explored here, AR and MR pose their own distinct benefits over VR, so deciding which is more suited to your needs (and budget!) is vital to ensuring that you’re introducing the technology for the right reasons. 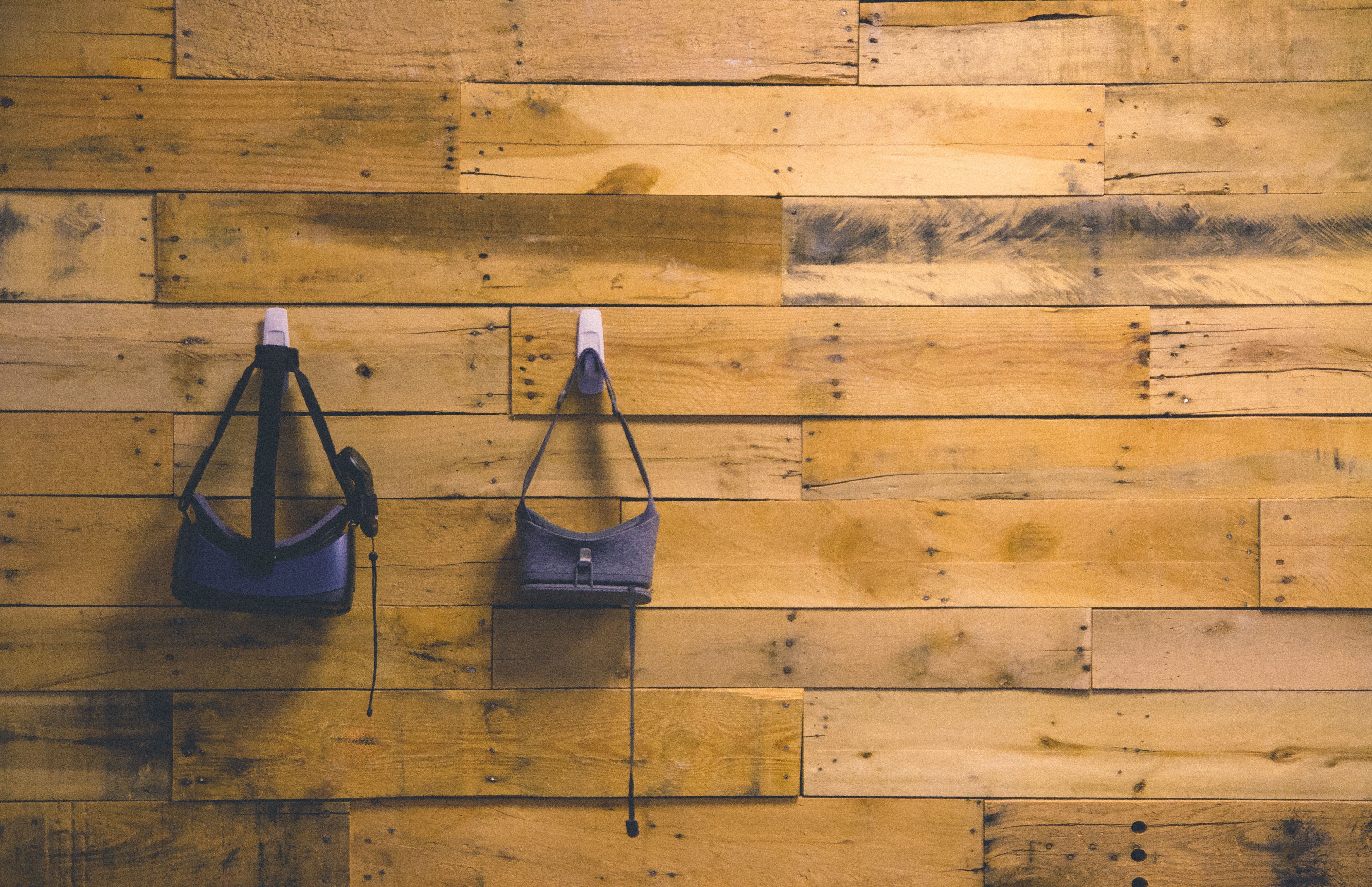 For work that still requires direct interaction with the real-world or uses that are enhanced by access to real-time data, AR is the better choice for the simple fact that users still need to be planted in reality in order to experience the benefits.

As the technology develops, immersive experiences are going to develop even more of an air of potent hallucinogens about them, but in this brave new world AR and MR mustn’t be viewed merely as a gateway drug for VR.

Spotted an impressive use of augmented reality in enterprise? Share it with us over Twitter, @hedgehoglabXR and @hedgehoglab.